Roger Federer cruised into the French Open second round on Monday and then hit out at the decision by Roland Garros organisers to introduce new balls at the tournament. 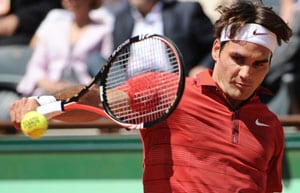 Roger Federer cruised into the French Open second round on Monday and then hit out at the decision by Roland Garros organisers to introduce new balls at the tournament.

Throughout the European claycourt swing, Dunlop balls were used but the second Grand Slam event of the season has instead opted for Babolat, which generally move faster through the air, as part of a new deal with manufacturers.

"I'm hearing a lot of conversations about the balls. It's just that they're not the same from what we've just played with for the last month," said Federer.

"And that for us is the most frustrating part, that the tournaments all changed to the Roland Garros ball after last year, (but) Roland Garros has changed their balls again.

"Now we're stuck with a different deal for all the different ATP Tour events. That is the frustrating part that we need to adjust before the French."

Britain's Andy Murray said he was unconcerned about the type of ball used but wished it was a consistent choice at the four Grand Slams.

"At the US Open they play with Wilson, and then in the hard court events in the build-up they use Penn. I think just for the players' wrists, joints, like your elbow and shoulder, it makes sense to just stick with the same ball," said Murray.

"The ball probably helps me as it is quite fast. But I would just rather we played with the same ball throughout each part of the season. During the grass, I'd rather all the tournaments were with Slazenger."

The new ball has also caused concern amongst the women players at the French Open, who fear for their physical well-being.

"A lot of the girls are coming in with shoulder issues. They say the balls are pretty hard," said Bethanie Mattek-Sands, the leading US player in Paris.

Novak Djokovic, the world number two and one of the favourites to topple Rafael Nadal as French Open champion, believes the big servers could benefit from the changes.

"The balls are very, very fast, so it's really difficult to control. Maybe it's going to favour the servers and the big hitters," said the Serb.

Federer had few problems with either the Babolat ball or first round opponent Feliciano Lopez on Monday as he clinched a 6-3, 6-4, 7-6 (7/3) first-round win, his ninth victory in nine outings against the Spanish left-hander.

The world number three, playing at his lowest seeding in eight years at a Grand Slam, is taking part in his 46th consecutive Grand Slam tournament.