Former basketball star Michael Jordan has filed a suit against a Chinese sportswear and shoe manufacturer for "unauthorized use" of his name and identity, his attorney said on Thursday. 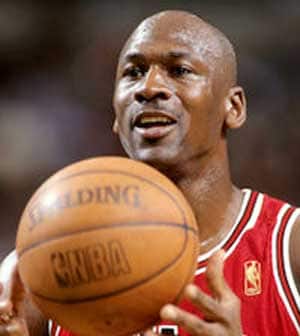 Former basketball star Michael Jordan has filed a suit against a Chinese sportswear and shoe manufacturer for "unauthorized use" of his name and identity, his attorney said on Thursday.

Jordan, who led the Chicago Bulls to six NBA titles during the 1990s, has been known in China by the name "Qiaodan" - the Chinese translation of Jordan - since he was first seen on Chinese television playing for the US basketball team in the 1984 Olympics, reported Xinhua.

The Chinese company, Qiaodan Sports Company Limited, has registered in 2000 and used the name "Qiaodan".

Jordan and his attorneys in Jun He Law Offices believed that the company "built a business" of Jordan's Chinese name without permission, and it also used the number 23 (the jersey Jordan wore during his NBA career) and "even attempt(ed)" to use the names of Jordan's children.

"Inspired by Yao Ming's case here in China, we had filed suit in a Chinese court on February 21 against Qiaodan Sports Company Limited," said Christine Kang, a partner of Jun He Law Offices.

China's popular basketball player Yao Ming has won his suit against a sportswear company in central China for using his name and signature without permission last year.

"Any monetary awards I might receive will be invested in growing the sport of basketball in China," said Jordan in a statement. "I am taking this action to preserve ownership of my name and my brand."

According to Jordan's official website, Qiaodan Sport's misuse of Michael Jordan's name and identity "has misled and continues to mislead consumers" in China.

Qiaodan Sports has filed for over 100 similar trademarks including trademarks containing the number 23.

Comments
Topics mentioned in this article
NBA French Open 2011
Get the latest updates on IPL 2020, check out the IPL Schedule for 2020 and Indian Premier League (IPL) Cricket live score . Like us on Facebook or follow us on Twitter for more sports updates. You can also download the NDTV Cricket app for Android or iOS.