In Rafa, Roger meets the Man with The Iron Chin

This time, it felt less like "au revoir" and more like farewell for Roger Federer. What may have been the great man's last best chance to beat Rafael Nadal at the French Open has come and gone. 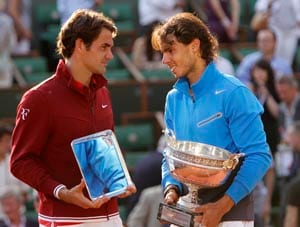 What may have been the great man's last best chance to beat Rafael Nadal at the French Open has come and gone.

And so, some will say, and perhaps not outlandishly, have his best years.

The verdict from France's red clay was merciless, yet again.

As magnificent as Federer is, and he acquitted himself so sublimely at Roland Garros on Sunday that his magnificence must still be described in the present tense, his four lost French finals to Nadal are a blot - well, perhaps more of an inkspot - on the greatest career tennis has seen.

Nadal is collecting Grand Slam titles at a pace that, if it continues, could see him eclipse Federer's high water mark of 16. (In Pics: Nadal's six French Open triumphs)

That, of course, is a lot of "ifs." Judging from his fine play here, Federer could still win yet more majors, with his sights already set on his own personal favorite, Wimbledon, next.

Other ifs are Nadal's knees and assorted joints. They've seized up in the past and, given the pounding he gives them, could always do so again. Plus, Nadal moaned at this tournament about how hard he grinds to stay at the top of tennis, saying the sport he believes should be a "passion" sometimes feels too much "like work."

That is not to say that the No. 1 is anywhere close to even thinking about easing up. But it takes a truly special player to match the gold standard of motivation that Federer has set since he bagged his first major in 2003.

And there's Novak Djokovic to consider, too. Even though Federer ended his 43-match winning streak in the semifinals here, he has muscled his way, permanently one feels, into the Roger-Rafa rivalry. Given his youth, the 24-year-old Serb could be Nadal's next big rival after Federer, who'll hit his 30s this August.

This final, like so many of the previous 24 Rafa-Roger matchups, should have been broadcast with a health warning: Caution, you will be glued to your set.

The 7-5, 7-6 (3), 5-7, 6-1 score didn't capture just how fluctuating and intense this contest was. A Federer backhand drop shot that plopped just wide of the line would have, had it gone in, given him the first set. It felt like a turning point, and it produced the kind of doubt that will become more inevitable with every passing year: Would that ball have landed inside the court during his younger years when Federer was practically unbeatable?

Similar questions were thrown up by his repeatedly wayward forehands. Federer of old perhaps wouldn't have let Nadal off the hook quite so often.

Which is one reason why this felt like Federer's best last chance against Nadal at Roland Garros, a tournament the Swiss has won just once, in 2009, when Nadal had already been sent home to some fishing in Mallorca.

Federer said Sunday he'll be back next year. But he won't be any younger.

Plus, Nadal showed signs of fragility at times during these two weeks in Paris, kicking himself on occasion for not playing to his own high, exacting standards. Federer, on the other hand, didn't lose a set until his impressive victory against Djokovic.

Federer was 25 years, 173 days when he hit double digits.

Nadal got there 171 days faster.

Not a margin to write home about. But proof, nonetheless, that when Federer looks behind him, there's a looming Spanish shadow.

If Nadal was a boxer, he'd be billed as The Man with the Iron Chin.

Federer chucked the kitchen sink at him on Sunday. Still, he wouldn't go down.

Forehands that zipped off Federer's racket with a "pop," zany-angled backhands that looked to be scudding out of court: Nadal hunted almost everything down like a hound told to "Fetch!"

Often, he not only retrieves seemingly lost balls but somehow manages to whip them back with interest, too. So where one venomous crosscourt winner might suffice against lesser players, Federer needs two, three or more cannon balls to breach the chateau-like defenses of Nadal.

When it comes off, one can only sit back and applaud Federer's tenacity and ability to make such a succession of fine shots. If at first you don't succeed ...

Because he is forced to make plays, Federer had many more winners - 53 to 39 - than Nadal.

But by hurling his artistry back at him, Nadal also forced Federer into mistakes. Federer had twice as many unforced errors, 56 to 27.

Appreciate it while it lasts.