Great to be back, says Clijsters after Paris exile

Kim Clijsters admitted it was great to be back at Roland Garros for the first time in five years, a return marked by a straight sets win in the French Open first round. 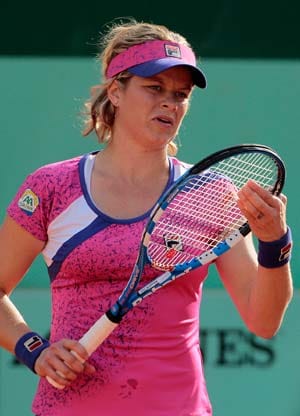 Kim Clijsters admitted it was great to be back at Roland Garros for the first time in five years, a return marked by a straight sets win in the French Open first round.

The Belgian second seed, whose last appearance ended in a semi-final defeat to compatriot Justine Henin in 2006, looked decidedly rusty on her claycourt return before seeing off Anastasiya Yakimova of Belarus 6-2, 6-3.

But the 27-year-old, a two-time finalist and who already has the US and Australian Opens under her belt, insists the old hunger is still there.

"I'm even more excited," said Clijsters, whose first final appearance in Paris was 10 years ago against Jennifer Capriati.

Clijsters was a serious injury doubt in the lead-up to the French Open.

She didn't play a claycourt event after a freak injury caused by dancing barefoot at a family wedding.

That extended an absence from the tour already stretching back to Miami in March because of a shoulder problem.

But her determination to make Roland Garros this year after missing out in 2010 through injury was as solid as ever.

"Even after Australia, all my workouts were with the clay season in mind. So it was disappointing when it (the ankle injury) happened, but it kind of just gave me another extra spark," she said.

"Last year I had the experience of not playing here and I didn't like it at all. I came to watch (Belgian compatriot) Kirsten Flipkens play, and that made it all even a little bit worse.

"So that motivated me more to work hard with my ankle and to go see my trainer a few times a day to heal faster."

Clijsters is still careful with her schedule.

The bulk of her five-year absence from Paris was due to retirement when she married basketball player Brian Lynch and started a family.

Daughter Jada, now four, was courtside to see her mother win her opener.

Clijsters watched some tennis from home during her recent time off court, even cheering on Maria Sharapova when the Russian, who has also been plagued by injuries, won the Rome International two weeks ago.

"I think she looked more happy than I have seen her, besides a Grand Slam, obviously. She looked extremely happy.

"And I enjoyed the emotions that her boyfriend gave and all that stuff. You know, the cute stuff."

Clijsters and Sharapova have something in common, apart from Grand Slam titles and a history of injuries.

Sharapova also has a basketball player in her life, NBA star Sasha Vujacic.

"They're big, but they're softies," said Clijsters.

Comments
Topics mentioned in this article
Tennis Kim Clijsters Maria Sharapova French Open 2011
Get the latest Cricket news, check out the India cricket schedule, Cricket live score . Like us on Facebook or follow us on Twitter for more sports updates. You can also download the NDTV Cricket app for Android or iOS.