Stosur, Jankovic sweep into 2nd round 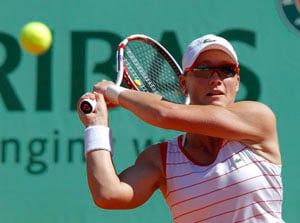 Eighth seed Stosur, the highest-seeded woman in action on the tournament's first day, defeated Czech Iveta Benesova 6-2, 6-3 to set up a clash with Romanian teenager Simona Halep, who she beat in last year's first round.

Jankovic, beaten by Stosur in the semi-finals 12 months ago, overcame Ukrainian Alona Bondarenko 6-3, 6-1 and will now face either one-time world number four Jelena Dokic of Australia or Russia's Vera Dushevina.

Stosur, returning to the scene of her defeat by Francesca Schiavone in last year's final, was broken in her opening service game on Court Philippe Chatrier but broke straight back before romping to a 4-1 lead.

The 27-year-old Australian converted her second set point when Benesova, the world number 52, miscued a stretching forehand and Stosur concluded a straightforward victory with a love service game in the second set.

"Overall I'm getting better and better," said Stosur, who lost to Maria Sharapova in the Rome Masters final earlier this month.

"I hope I'm becoming a better player, a more complete player as each year goes on. This time last year I played some of the best matches of my career and hopefully I can do that again this week."

Jankovic, who also reached the Roland Garros last four in 2007 and 2008, rarely looked unsettled as she recorded a 13th victory over Bondarenko in 14 encounters.

The Serb spurned two break points but then broke for a 4-2 lead before taking the first set when Bondarenko scuttled a forehand into the net at 5-3 down.

A pair of breaks put the 26-year-old Jankovic 4-1 to the good in the second set and she overcame belated resistance from the Ukrainian to prevail on her third match point.

Alize Cornet become the first French woman into the second round, the world number 80 beating Renata Voracova of the Czech Republic 6-4, 6-2.

Comments
Topics mentioned in this article
Tennis Andy Murray Juan Martin del Potro Samantha Stosur Venus Williams Novak Djokovic Iveta Benesova French Open 2011 French Open 2011
Get the latest updates on IPL 2020, check out the IPL Schedule for 2020 and Indian Premier League (IPL) Cricket live score . Like us on Facebook or follow us on Twitter for more sports updates. You can also download the NDTV Cricket app for Android or iOS.