Federer moves into 3rd round at French Open

Roger Federer ran off 13 straight games in beating French wild card Maxime Teixeira 6-3, 6-0, 6-2 on Wednesday in the second round of the French Open. 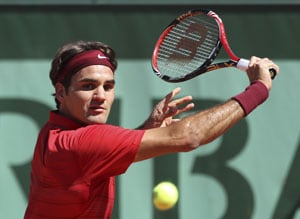 Roger Federer ran off 13 straight games in beating French wild card Maxime Teixeira 6-3, 6-0, 6-2 on Wednesday in the second round of the French Open.

The 2009 champion at Roland Garros was broken once early in the first set. But after Teixeira held to go to 3-3, Federer dominated and didn't lose another game until the Frenchman made it 4-1 in the third.

"It's so difficult to come out and play on a big court when you are not used to it," Federer said of his 22-year-old opponent. "I'm playing here for the 12th year and I'm very experienced."

Also, 2010 French Open finalist Sam Stosur advanced to the third round by beating Simona Halep 6-0, 6-2. The eighth-seeded Stosur had 21 winners and broke her opponent six times before she served out the match at love.

Later Wednesday, Novak Djokovic will be back on court in the second round. Top-ranked Caroline Wozniacki is also playing, along with 2010 French Open champion Francesca Schiavone.

Federer was playing against a man who had won his first tour-level match in the first round, when he beat another French wild card. But Teixeira never really had a chance against the 16-time Grand Slam champion.

"I gave it all. I did what I could," Teixeira said. "To play against Roger is an incredible experience. I'll never forget it and it will be great memories."

Tipsarevic took Federer to five sets in the third round of the 2008 Australian Open, eventually losing 10-8.

On Tuesday, Australian Open champion Kim Clijsters made her return to Roland Garros.

The two-time runner-up, who last played on the red clay of Roland Garros in 2006, has been preparing for the French Open for months.

"All my workouts that I was doing with my trainer were all kind of with the clay season in mind, and we were doing longer intervals, kind of knowing that the rallies would be a little bit longer," Clijsters said Tuesday after advancing to the second round. "Everything was kind of set already on this event a few months ago."

But then, in April, she injured her right ankle dancing at her cousin's wedding, putting her participation in doubt.

The injury didn't appear to affect her much, however, because Clijsters passed her first test by beating Anastasiya Yakimova of Belarus 6-2, 6-3.

Clijsters said she was excited to make it back to Roland Garros, where she made the final in 2001 and '03.

"My buildup has been weird, but it's been everything with my mind focused on trying to make it to the French Open," Clijsters said. "And when you're here now, yeah, you kind of just want to keep focusing and finish off on what I worked on in those few weeks."

Clijsters nearly didn't make to Paris at all.

She hurt her ankle while dancing barefoot at the wedding and hadn't played a competitive match since.

"It feels steady and good. So it's important now when I get back to the hotel that I ice it a lot and that I take good care of it, and I will have treatment," Clijsters said. "Then tomorrow just make sure I keep mobilizing it so that I don't get more inflammation than I have already."