A month before the French Open, Marion Bartoli was persona non grata in Paris. 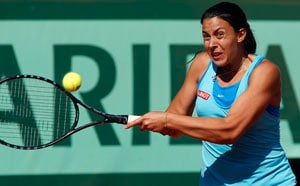 A month before the French Open, Marion Bartoli was persona non grata in Paris.

Things are likely to change after her semifinal run at Roland Garros, which ended with a 6-3, 6-3 loss to Francesca Schiavone on Thursday.

"The fact that I'm able to play well in France and that I can have the public supporting me, it's enormous satisfaction," Bartoli said. "I think that is what I will remember from this tournament."

Before the tournament began, Bartoli was involved in a public spat with Fed Cup captain Nicolas Escude. The dispute, which centered around her independent coaching setup, led to her being left off the team that lost to Spain in the playoffs.

She put those problems behind her at Roland Garros, but she was hesitant to say whether her run in Paris will be a turning point in her career.

"It's a bit too early to say whether it will be or not," Bartoli said. "I think I need to use that loss to draw the lessons and improve even more. I think the fact that I went one step further here will help me."

Bartoli became only the fourth Frenchwoman to reach the semifinals at Roland Garros in the Open era. And she did it by defeating 2009 champion Svetlana Kuznetsova in the quarterfinals on a surface she doesn't like.

"First, I improved physically, and then I am a lot more confident, or I have been since I have been here, because before this tournament I had many doubts," said Bartoli, the 2007 Wimbledon runner-up. "I was not sure I was able to play on clay."

A week before the French Open, Bartoli's confidence on the surface improved when she reached her first ever clay-court final in Strasbourg.

"It was very good for my confidence and it helped me in this particular tournament to go one step further," Bartoli said. "As you get used to the surface point after point. So even if I had tough matches, I played a lot on clay."

Looking ahead to Wimbledon, where she lost to Venus Williams in that 2007 final, Bartoli said she will be more confident on grass because of her display in Paris.

But her chances of getting back on the Fed Cup, and even on the 2012 Olympic team, are still up in the air.

"I said I had nothing against the Fed Cup," Bartoli said. "(French Tennis Federation president) Jean Gachassin was here today and he supported me from the first point to the last.

"Unfortunately, in the French team there are some rules you have to comply with that are not good for me," Bartoli added. "For the time being I know I can't change."

Comments
Topics mentioned in this article
Tennis Francesca Schiavone Andy Murray Marion Bartoli Na Li French Open 2011
Get the latest Cricket news, check out the India cricket schedule, Cricket live score . Like us on Facebook or follow us on Twitter for more sports updates. You can also download the NDTV Cricket app for Android or iOS.