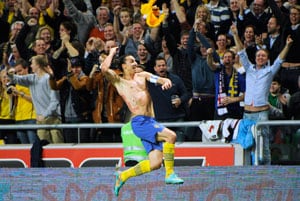 The Paris Saint Germain striker destroyed England with a four-goal salvo in a 4-2 success in Stockholm - but it was his instinctive overhead effort from distance which left many observers gasping, Zidane included.

Ibrahimovic is "an extraordinary player," said Zidane. "I never managed to score four in a game," added the Frenchman, though he did manage a brace in the 1998 World Cup final success over Brazil.

"It was magnificent - especially the overhead kick," enthused Zidane, who scored a goal of similar athletic class in Real Madrid's Champions League final win over Bayern Leverkusen in 2002.

Regarding France's 2-1 friendly win in Italy, Zidane said: "They did the job. After (drawing a World Cup qualifier with) Spain they confirmed they are on the right track.

"It is not easy to win in Italy - I know that after difficult confrontations with Italy," added the French legend, famously sent off in the 2006 World Cup final against the Azzurri.

Comments
Topics mentioned in this article
Football France Sweden Zlatan Ibrahimovic
Get the latest Cricket news, check out the India cricket schedule, Cricket live score . Like us on Facebook or follow us on Twitter for more sports updates. You can also download the NDTV Cricket app for Android or iOS.