Brazil have a perfect record of eight wins from their eight World Cup qualifiers so far ahead of Thursday's trip to Venezuela, followed by a clash away to Colombia on Sunday and the visit of Uruguay next week. 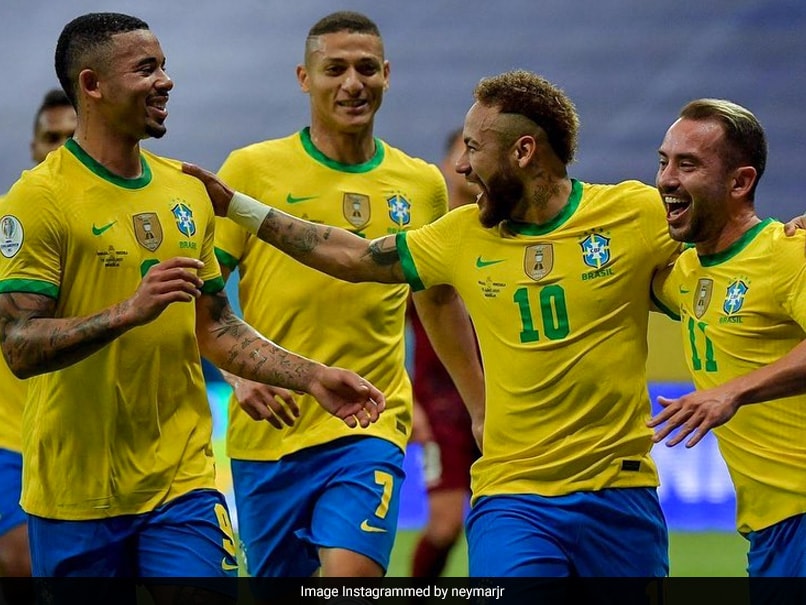 Brazil will look to continue their good form in the World Cup Qualifiers.© Instagram

After last month's turbulent round of World Cup qualification matches, for their next games Brazil can boast a full squad and a clear objective: booking their ticket for Qatar. The Selecao have a perfect record of eight wins from their eight qualifiers so far ahead of Thursday's trip to Venezuela, followed by a clash away to Colombia on Sunday and the visit of Uruguay next week. Three more victories could possibly secure Brazil's qualification in record time. "Obviously it's always good to qualify as soon as possible," said Juventus's 30-year-old fullback Alex Sandro. "However, we always think about playing to win, playing our best, showing everything we've been working on. In the next games we're going to do our best to secure qualification," he added.

Brazil will also hope to avoid the chaos of last month's qualifiers when coach Tite was shorn of nine members of his original squad -- including the likes of Chelsea's Thiago Silva, Liverpool trio Alisson, Roberto Firmino and Fabinho, Manchester City duo Ederson and Gabriel Jesus, and Manchester United's Fred -- and saw their clash with Argentina abandoned after just 10 minutes by Brazilian public health officials.

Covid was largely to blame for both issues, with English clubs refusing to release their players due to quarantine obligations -- a matter that has since been resolved between the British and Brazilian governments.

Likewise, Brazil's Covid regulations were behind the health officials' actions after Argentina fielded four English-based players despite them being required to quarantine for two weeks upon arrival in Brazil.

Those issues have now been confined to the past, although there is still no news on when the match will be replayed.

And for Leeds United winger Raphinha it's a major relief after his first call-up to the Brazilian squad was aborted by his club's refusal to release him.

"I was very difficult, I was very frustrated. Of course, I was hoping until the last minute that I could come," Raphinha said about the experience.

"All I could do was keep calm, keep working hard, because I knew there would be another call-up in a few weeks time," he added.

It has all worked out well for Raphinha, who has been in fine form in the English Premier League.

"It's a very happy moment in my career and in my life," he added.

Despite their depleted squad last time out, Brazil still won 1-0 away to Chile and beat Peru 2-0 at home with a goal from Neymar, who is suspended against Venezuela.

Brazil lead the single South American qualifying table by six points from Argentina and their in-form Lionel Messi, who last week opened his account for Paris Saint-Germain with a wonder goal to seal a 2-0 Champions League win over Manchester City.

Unbeaten Argentina travel to Paraguay on Thursday, host Uruguay on Sunday and then entertain Peru next week.

Last time out, Messi scored a hat-trick in a 3-0 win at Bolivia to overtake Pele as the top international goalscorer in South American football, taking his tally to 79 goals in the light blue and white stripes.

South American teams will be playing three World Cup qualifiers in the space of one week because a number of matches earlier this year and last year were postponed due to Covid, creating a fixture backlog.

"I'm a bit worried about these matches," admitted Argentina coach Lionel Scaloni, who has to make do without injured forwards Sergio Aguero and Paulo Dybala.

"It's something new for us, we hope to tackle them in the best way," he added.

Like Brazil, Copa America champions Argentina's qualification looks to be a formality but the battle behind them for the remaining two places is fierce.

Uruguay, Ecuador, Colombia and Paraguay are separated by just four points, with another nine matches still to play.

Uruguay entertain Colombia on Thursday boosted by the return of the country's two leading lights, Luis Suarez, from injury, and Edinson Cavani, who was prevented from traveling in September by his club Manchester United.

They were hardly missed last month, as Uruguay picked up seven points out of a possible nine.

But after Colombia they travel to Argentina and Brazil.

Even so, Cavani is feeling bullish, saying Uruguay will "try not to drop points at home" and can "go out and compete anywhere."

Argentina Paulo Dybala Roberto Firmino Football
Get the latest updates on IPL Auction 2023 and check out  IPL 2023 and Live Cricket Score. Like us on Facebook or follow us on Twitter for more sports updates. You can also download the NDTV Cricket app for Android or iOS.