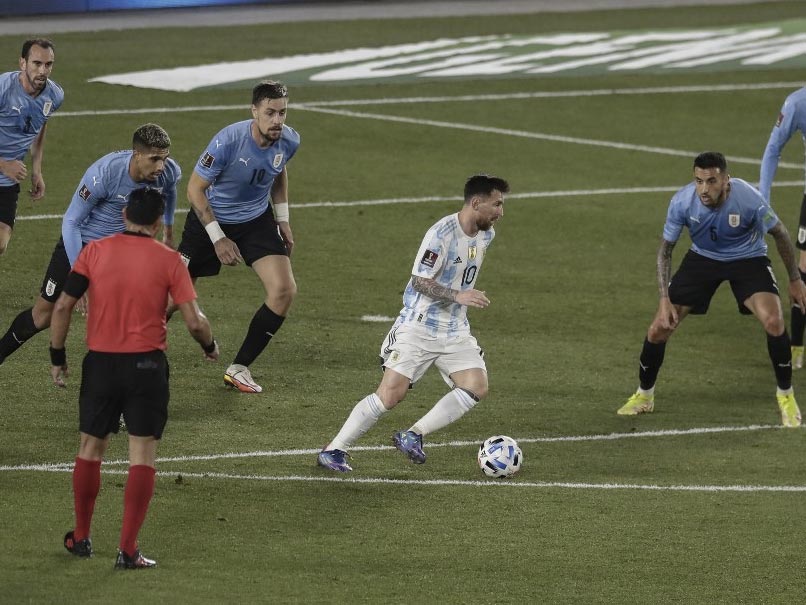 Lionel Messi scored in the 38th minute to give Argentina the lead.© AFP

Lionel Messi opened the scoring as Argentina thumped neighbors Uruguay 3-0 in an entertaining World Cup qualifier on Sunday. Goals from Rodrigo De Paul and Lautaro Martinez rounded off a successful night for Lionel Scaloni's team in Buenos Aires as they maintained their unbeaten start to the qualification campaign and closed the gap at the top of the single South American table to six points behind Brazil, who drew 0-0 with Colombia. "We played a great match, I think we're improving a lot," said Messi. "It was a tough match and we had to win it. Uruguay sit back and are dangerous. Once we scored the first goal we started to find spaces and many appeared," he added.

The first half was a classic end-to-end thriller with both sides hitting the woodwork before Argentina opened the scoring.

Uruguay's Luis Suarez looked lively early on and had three gilt-edged chances, all from the corner of the six yard box.

Two, including an acrobatic volley, were parried by goalkeeper Emiliano Martinez, while his third effort came back off the near post.

Lo Celso then broke from deep and rounded goalkeeper Fernando Muslera, but his shot crashed down off the bar onto the goalline before bouncing away to safety.

Messi had a low shot from the D deflected inches past the post and then broke the deadlock in bizarre fashion.

His chip into the box with the outside of his left boot was missed by Nicolas Gonzalez, whose presence seemed to deceive Muslera, the goalkeeper also missing the ball as it nestled in the bottom corner.

Muslera flirted with disaster moments later when he dribbled past Martinez in his area but Uruguay's nerves were rattled and Argentina doubled their lead with another scrapy goal.

Messi's pass was deflected into the path of Martinez whose miss-kick fell kindly for De Paul to stroke home.

Martinez then had a chance to put the game to bed in first half stoppage time but shot straight at Muslera.

He did secure the win, though, on 62 minutes when left unmarked at the back post to tap in De Paul's cross.

The second half did not match the thrill-a-minute first but Argentina controlled the game.

It could have been worse for Uruguay but Muslera made a fine double save from Angel Di Maria and Messi in the last minute.

The returning Neymar could not inspire Brazil to victory as hosts Colombia ended their perfect start to the qualification campaign in Barraquilla.

The Selecao had won their first nine qualifiers, scoring 22 goals to lead the table by eight points before kick-off.

Coach Tite's side are still almost certain to qualify for next year's finals in Qatar as they maintain a 13-point lead over fifth-placed Colombia, with the top four progressing automatically.

"Neymar did well as the team's leader," said Tite, but "he was well marshalled" by a Colombian side that has "more technical qualities than other teams."

Brazil started brightly and dominated the opening quarter as Colombia goalkeeper David Ospina made saves from Neymar and Lucas Paqueta.

Neymar's cute reverse pass then put Paqueta in one-on-one with Ospina but on the stretch he poked the ball wide.

Neymar was at the heart of much of Brazil's attacks but when he teed up a teammate on the edge of the area, it was defensive midfielder Fred who appeared on the scene, and it was no surprise to see him blaze over the bar from 18 yards.

Colombia grew more adventurous in the second half and Brazil goalkeeper Alisson Becker saved efforts from Mateus Uribe and Juan Quintero, while Radamel Falcao had the ball in the net 20 minutes from time but it was disallowed for a foul on Militao.

Raphinha almost fashioned a winner for Brazil when he picked out fellow substitute Antony with a perfect in-swinging delivery, only for Ospina to make a brilliant reaction save from point-blank range.

It was a good day for the bottom two teams in the group as Bolivia beat Peru 1-0 and Venezuela defeated Ecuador 2-1.

Goals from Darwin Machis and Eduard Bello either side of a penalty from Enner Valencia were enough to give Venezuela a rare win.

In the late match, goals from English-born Ben Brereton and Mauricio Isla gave Chile, who had Charles Aranguiz sent off, a 2-0 win over Paraguay, who had Omar Aldieret dismissed.

Lionel Messi Neymar Football
Get the latest updates on ICC T20 Worldcup 2022, check out the Schedule and Live Score. Like us on Facebook or follow us on Twitter for more sports updates. You can also download the NDTV Cricket app for Android or iOS.