Messi, with his unmatched attacking style and dribbling ability, is expected to be unstoppable for most of his opponents at the World Cup in Russia. 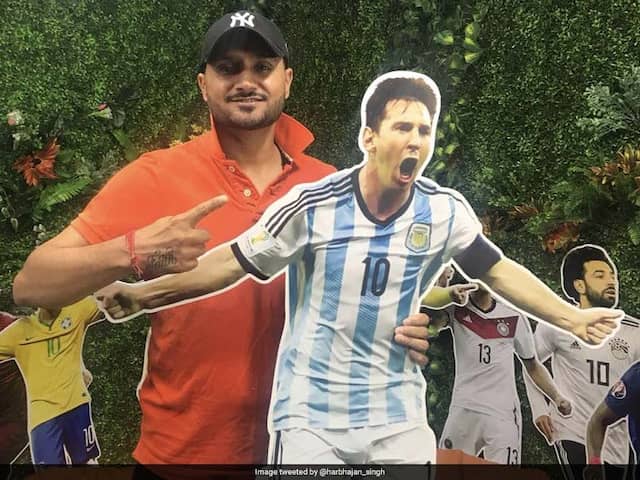 All eyes are on Russia as the 21st edition of the quadrennial football extravaganza, the FIFA World Cup, kicked off at Moscow's Luzhniki Stadium on Thursday. Just like every football fan, Indian sports stars are also bitten by the World Cup bug. The veteran Indian spinner, Harbhajan Singh, who is an ardent Lionel Messi fan, took to Twitter and admitted that he will be having sleepless nights for next one months as the talisman striker will be eyeing to win the elusive trophy for Argentina. "Over the next one month I am gonna sleepless night for this man.. GO MESSI GO @TeamMessi @FIFAWorldCup #Argentina ?? #Russia2018", Harbhajan tweeted.

Over the next one month I am gonna sleepless night for this man.. GO MESSI GO @TeamMessi @FIFAWorldCup #Argentina #Russia2018 pic.twitter.com/liuckzWbYM

Messi, with his unmatched attacking style and dribbling ability, is expected to be unstoppable for most of his opponents at the World Cup in Russia. He had an incredible run in the 2014 showpiece event but Argentina did not have enough collective firepower to beat Germany in the final. However, this year, Messi might end his wait for an elusive major trophy with his national side.

The man, who regularly scores 50-plus goals a season, turns 31 at the end of June, and this is probably the last shot at getting his hands on a World Cup trophy.

Despite his towering achievements at Barcelona, La Albiceleste's all-time leading goal-scorer has not been able to translate his club success at the international level. Argentina lost the finals of the 2014 World Cup and the 2015 and 2016 Copa America, with the celebrated forward failing to score in all of them.

The criticism took such a toll on him that Messi briefly retired from international football. Still, there is little doubt that his presence alone makes Argentina a formidable side.

Argentina, who are placed in Group D alongside Croatia, Iceland, Nigeria, will be opening their 2018 campaign against Iceland at Spartak Stadium, Moscow on Saturday.

A turbulent qualification campaign saw Argentina book their place at the last opportunity with a victory over Ecuador, but the losing finalists in 2014 will be looking to go one better.

However, a Messi-less side's 1-6 loss to Spain in March suggests that this is a big ask. They are most certainly not a one-man team but Messi scored at least five more goals than any other Argentinian in qualification and will, of course, be marked heavily in every game that Argentina play.

As far as Harbhajan is concerned, he was an integral part of the Chennai Super Kings team that lifted the Indian Premier League (IPL) 2018 title, defeating SunRisers Hyderabad by eight wickets in the summit clash at the Wankhede Stadium in Mumbai on May 27.

Lionel Messi Football Cricket 2018 FIFA World Cup
Get the latest Cricket news, check out the India cricket schedule, Cricket live score . Like us on Facebook or follow us on Twitter for more sports updates. You can also download the NDTV Cricket app for Android or iOS.