With the runner-up in the five-team group not even assured of a third round slot, India cannot afford to lose against Afghanistan. 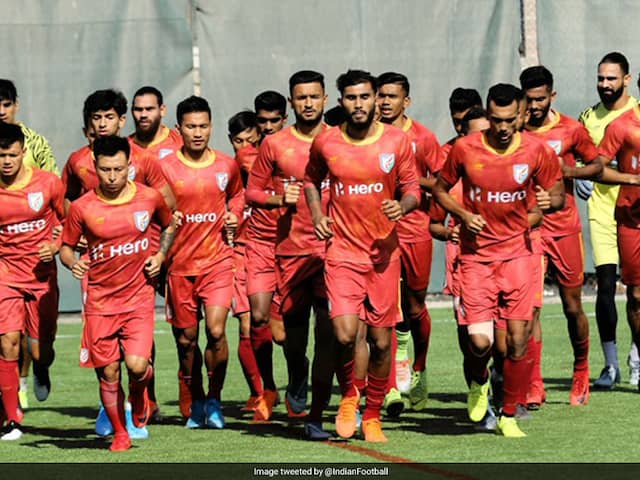 Struggling to find consistency in a winless campaign so far, the Indian football team needs nothing less than a win in its crunch World Cup qualifying round match against Afghanistan to be played in freezing temperatures in Dushanbe, Tajikistan on Thursday. India began the second round of the qualifiers with a narrow 1-2 defeat to higher-ranked Oman before a memorable goal-less draw against Asian champions Qatar in Doha in September. The good show in the first two matches raised hopes of a possible third round berth but a 1-1 draw against Bangladesh in Kolkata on October 15 came as a dampener. Had it not been for Adil Khan's last-gasp header (88th minute), Igor Stimac's side would have utterly disappointed the capacity crowd at the Salt Lake Stadium that day. The team is now at fourth place in the Group E table with two points from three matches.

With the runner-up in the five-team group not even assured of a third round slot, India cannot afford to lose against Afghanistan.

The Afghans, who are 149th in FIFA rankings against India 106th position, are placed third in the group with one win and two losses.

Stimac understands the situation his team is in, that it cannot afford to slip at any cost.

"It will not come to us, rather we need to go and snatch it. It's always about us and our performance to achieve something," the Croatian said.

The war-ravaged Afghanistan chose Dushanbe as their home venue and the match will be played on artificial turf amid freezing temperatures.

This has added to the woes of Stimac whose players are not used to these playing conditions. "It's very cold and mercury level drops to closer to sub-zero," Stimac said.

"Moreover, the match is scheduled on an artificial turf which our players are not used to. Afghanistan have chosen the venue to make others' life difficult and we have an uphill task in front of us to overcome it," he added.

The talismanic Sunil Chhetri said the players will have to convert the chances they get, something that they couldn't do against Bangladesh.

"We are creating chances. But that's not enough. We have to try our best to convert them and try to be a tougher unit while defending," Chhetri said.

India also suffered a jolt after central defender Anas Edathodika had to return home from Dubai, where the team had a stopover on way to Dushanbe, due to the death of his mother.

Anas was a long-time partner of the imposing Sandesh Jhingan, who is currently recovering from an injury.

The team is also without key mid-fielder Rowlin Borges, who is also nursing an injury.

The two teams have faced each other eight times out of which India have emerged victorious on six occasions.

They have drawn once and lost on one occasion. But the last time the two sides played against each other, Afghanistan had won 2-0 in the 2013 SAFF Championship final.

Afghanistan will come into this match after beating Bangladesh 1-0. They had lost heavily to Oman (0-3) and Qatar (0-6) in their earlier matches.

Their most capped player Haroon Amiri is a known face for the Indian players as he has played in the country for a long time, starting 2011.

He played in the inaugural Indian Super League in 2014 for FC Goa and has joined I-League side Gokulam Kerala FC for this season.

Amiri has 48 international appearances to his credit. Captain Farshad Noor graduated from Dutch giants PSV Eindhoven's youth system though he never played for the senior team in the two seasons he was there from 2013.

The 25-year-old midfielder has scored Afghanistan's only goal in the World Cup qualifiers so far, against Bangladesh.