Wenger comes out fighting ahead of Man Utd trip

Arsene Wenger has come out fighting after Arsenal's Champions League defeat to Barcelona and he must hope his side does the same as they attempt to salvage their season in the FA Cup sixth round clash at Manchester United. 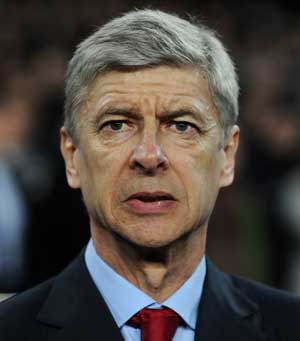 Arsene Wenger has come out fighting after Arsenal's Champions League defeat to Barcelona and he must hope his side does the same as they attempt to salvage their season in the FA Cup sixth round clash at Manchester United.

Gunners manager Wenger and midfielder Samir Nasri were charged with improper conduct by UEFA for comments they made to referee Massimo Busacca immediately after the 3-1 defeat at the Nou Camp.

Wenger and his players were incensed by the controversial sending off of Robin van Persie that, the manager claimed, cost Arsenal the game and a place in the quarterfinals.

Wenger has vowed to fight the charge, branding UEFA a "dictatorship" in the process, but after seeing his side exit two cup competitions in quick succession he knows the more important battle will take place on the pitch at Old Trafford.

Another defeat and Arsenal's sole remaining target will be to chase down United in the Premier League where Sir Alex Ferguson's side have a three-point advantage having played a game more.

A victory, though, and a return to the FA Cup final for the first time since 2005, the last time Arsenal won a trophy, will open up.

Wenger is in no doubt about the importance of a victory. "We need it, I must say, because we need help," he said. "We have been touched severely recently and we are of course chasing after a win of that type.

"I have said since the start of the season that we will go for all of the competitions. We have got two left and we lost one in the last minute, we played another, against the super favourite of the Champions League, and we lost under special circumstances.

"We need to keep the right attitude to turn the luck around on our side a little bit. We are disappointed, but we want to focus on our next target, and we have big targets in front of us."

Recent form weighs heavily against Wenger's side with the Gunners having lost five and drawn one of their last six meetings with United and last won at Old Trafford in 2006.

To add to their concerns, skipper Cesc Fabregas is out after suffering a recurrence of a hamstring problem against Barca although Van Persie, fresh after his unwanted rest, is fit to start.

United are not without their own problems, however, and Ferguson's admission that Arsenal have shaken up the pecking order at the top of the Premier League signalled a renewed respect for Wenger's team.

Last weekend's defeat to Liverpool meant Ferguson's side have lost three of their last five league games and face a nervy second leg meeting with Marseille in the Champions League next week having emerged from the first leg with a scoreless draw.

The stakes are always high when United and Arsenal meet but with both anxious to kickstart the run-in towards the end of the season, this meeting is likely to have an added edge.

Traditionally the cup has been kind to United who have won it a record 11 times, once more than Arsenal, although their last triumph came seven years ago in 2004.

"There is a good chunk of us who haven't won the FA Cup, so we are desperate to progress," said United midfielder Michael Carrick, who recently agreed a new three-year contract to remain at the club.

"I was fortunate enough to play in a final at Wembley when I played against Chelsea in 2007 but we lost so my memories are not too fond.

"It was hard to take losing that final. I have been lucky enough to win other trophies and I am very proud of them but missing out on this one hurts.

"I think that goes for a lot of our squad. That's why we are so keen to get to Wembley and win this time. A lot of us are missing that medal and we want one."

Comments
Topics mentioned in this article
Football Birmingham City Everton Liverpool Steven Gerrard Chelsea Arsenal
Get the latest updates on ICC T20 Worldcup 2022 and CWG 2022 check out the Schedule, Live Score and Medals Tally. Like us on Facebook or follow us on Twitter for more sports updates. You can also download the NDTV Cricket app for Android or iOS.