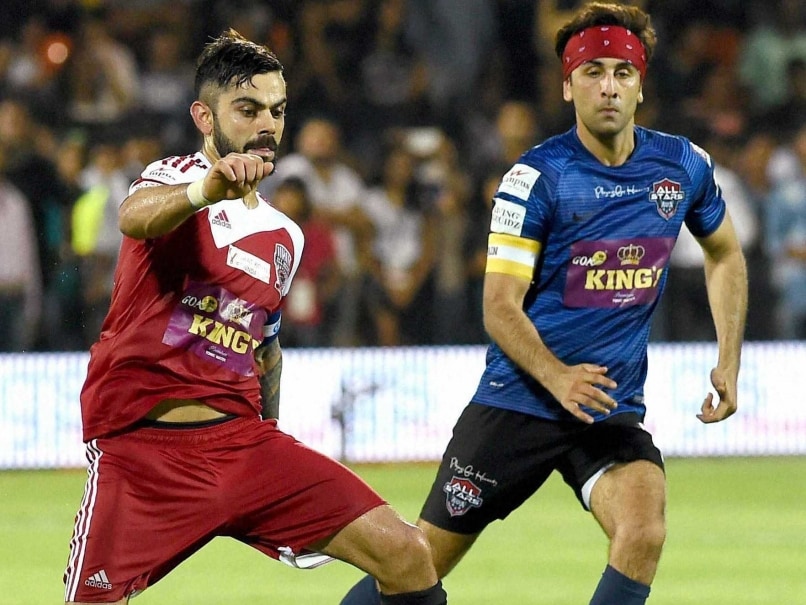 Virat Kohli vies for the ball with Ranbir Kapoor during a charity football match.© PTI

A charity football match between Indian cricketers led by Virat Kohli and actors ended in a 2-2 draw, but actor Abhishek Bachchan said irrespective of the draw the noble cause for which the match was held emerged the winner.

The match, entitled 'Celebrity Classico 2016', between cricketers' team 'All Hearts' and the filmstars' team 'All Stars' took place at the Mumbai Football Arena in Andheri Sports Complex on Saturday.

Abhishek's charity 'Playing for Humanity' and cricketer Virat Kohli's charity 'The Virat Kohli Foundation' were behind this initiative to raise funds for those affected by the severe drought in Maharashtra.

It was Sircar who scored the first goal for All Stars, while the second goal came from Ranbir's trainer Antonio Pecora. For All Heart, it was Yuvraj Singh and KL Rahul who scored the goals.

"Well it was a draw and we're very happy because the last time we played we lost by one goal. I'm very proud of Ranbir and the entire team. They played with all their hearts. We are very proud and honoured that we got the opportunity to play against the Indian cricket team," Abhishek said after the match.

The actor said that it was the idea of Aditya Thackeray, president of Shiv Sena'a youth wing Yuva Sena, to do the charity match for drought victims.

"It's been my favourite sport since childhood and we all took it seriously. We play every Sunday. We're really happy that we can play for such a good cause," Ranbir said.

Ranbir and Abhishek are co-owners of football teams in the Indian Super League.

Comments
Topics mentioned in this article
Virat Kohli Lokesh Rahul Yuvraj Singh Football
Get the latest updates on IPL 2021, check out the IPL 2021 Schedule and Indian Premier League Live Score . Like us on Facebook or follow us on Twitter for more sports updates. You can also download the NDTV Cricket app for Android or iOS.