Manchester City manager Pep Guardiola showed that he is indeed the man for all seasons with his viral video, belting out an 'Oasis' hit number while puffing away on a cigar. 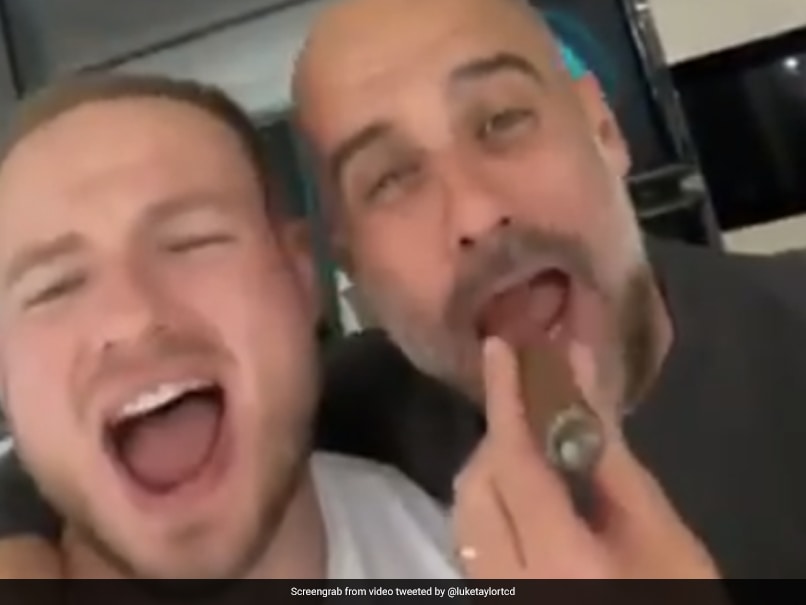 Pep Guardiola sang 'Don't Look Back In Anger' by Oasis while smoking a cigar.© Twitter

Manchester City boss Pep Guardiola is regarded by many as the best manager in world football currently and while some might argue against that notion, there is no denying that his cool quotient is up there with the very best. In a video that has gone viral on social media, the former Barcelona footballer is seen puffing on a cigar and belting out former British band Oasis' hit song - 'Don't look back in anger'. The video appears to have been taken from a party to celebrate Manchester City's Premier League title triumph.

In the video, Guardiola is seen puffing on a cigar with the Oasis song playing in the background. He starts mouthing the lyrics before pulling in another person in and belting out the chorus.

After shouting into the other person's ear that it is a Noel Gallagher song -- Oasis legend and a die-hard Manchester City fan -- both proceed to sing the chorus loudly arm in arm.

Pep Guardiola under the influence, smoking a cigar & belting out the Oasis anthem 'Don't Look Back In Anger'.
Regardless of which team you support, there is no denying Pep is the coolest cat in town.pic.twitter.com/Q6lCld01xx

Guardiola's Man City had won the League Cup in April and will have a chance to win the treble when they take on Chelsea in Champions League final in Portugal on May 29.

"This has been a season and a Premier League title like no other. This was the hardest one," Guardiola said after Man City were crowned Premier League champions.

"We will always remember this season for the way we won. I am so proud to be the manager here and of this group of players.

"They are so special. To come through this season, with all the restrictions and difficulties we've faced, and show the consistency we have is remarkable. It is relentless," he added.

Manchester City Pep Guardiola English Premier League Football
Get the latest updates on IPL 2021, check out the IPL 2021 Schedule and Indian Premier League Live Score . Like us on Facebook or follow us on Twitter for more sports updates. You can also download the NDTV Cricket app for Android or iOS.