Abdiev scored at the stroke of break and on the commencement of the second half apart from setting up another goal to hand his side three important points. Uzbekistan are now nine points three matches while India are on three points from as many matches. 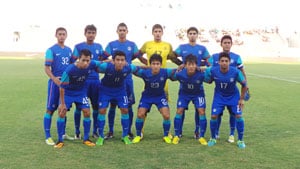 Abdiev Asliddin scored in each half to guide Uzbekistan to a 3-0 victory over India in A cruical Group A encounter of the AFC U-19 Championship (Qualifiers) here at the Al Arabi Stadium on Thursday (October 10, 2013).

Abdiev scored at the stroke of break and on the commencement of the second half apart from setting up another goal to hand his side three important points. Uzbekistan are now nine points three matches while India are on three points from as many matches.

"We played against a very good side," chief coach Colm Joseph Toal said at the post match press conference.

"The best part from our perspective is that we kept them going for the entire 93 minutes. We had some good spells especially at the end of the first half. There was a penalty shout which I feel on another may have been given.

"Against such a strong opposition you do need decisions to go your way and we were having a good spell at that time. Nevertheless, the stronger team won and I am happy that the Boys never let their shoulders droop," added Toal.

India looked the sprightlier of two sides in the opening exchanges. Daniel Lalhlimpuia sped down the inside right channel but failed to find Udanta inside the area as his cutback-pass was intercepted on its way.

Uzbekistan relied on the breaks and earned three corners in the first fifteen minutes. All three did not trouble Indian custodian Vishal Kaith. Abdiev Asliddin had shot wide before that in the 9th minute.

The highest ranked outfit in the Group started using their physical advantage to get the better of their counterparts, but the Indian backline kept shape and dealt with the pressure well.

The wings got on the offensive at every opportunity and one such occasion saw Udanta-teed up by Germanpreet Singh-racing down the left flank before going to a challenge inside the box. Referee Mukhtar Saleh Ali Al Yarimi of Yemen waved played on.

As the match neared halftime, the duo of Germanpreet and Udanta gave the Uzbeks a tough time combining superbly on the left wing. India were creating a lot of chances in the final few minutes of the first half. Uzbekistan on the other hand, got one and capitalised on it.

Azimov Sardorbek cut inside fullback Gurba Gagrai on the left and fed Abdiev who made no mistake from close range, stabbing home across goal into the bottom right corner.

The Uzbeks doubled their lead in the 51st minute when goalscorer Abdiev turned provider sending in a teasing floater for Davlatov Bobir to poke home.

11 minutes later Abdiev capped a good display to score his second of the night, climbing tallest to a Azimov corner.

India play Turkmenistan next on October 12.