Usain Bolt has already tried out with teams in Germany, Norway and South Africa, to no avail, since retiring from athletics last year. 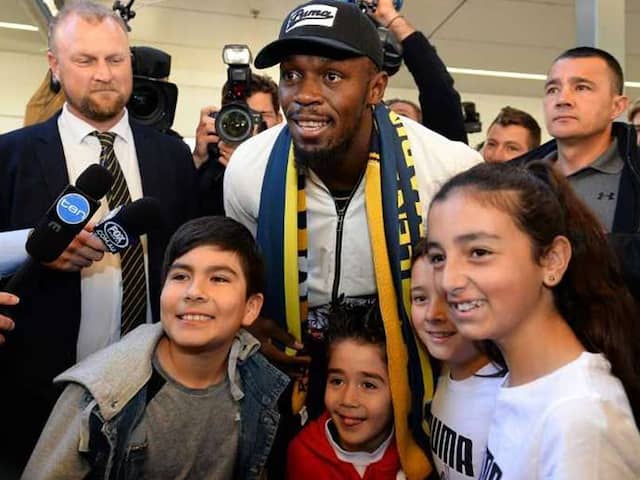 Usain Bolt, wearing a Mariners scarf, was met by the media and fans at Sydney airport.© AFP

Usain Bolt said he's deadly serious about becoming a professional footballer and plans to show the world what he's capable of after arriving in Australia on Saturday for a trial stint with an A-League club. The superstar athlete has been given the chance to prove his worth by the Central Coast Mariners, who have agreed to let him train with the team indefinitely in his pursuit of a playing contract. They hope to turn him into A-League material in time for the start of the 2018/19 season in late October.

Bolt, wearing a Mariners scarf, was met by a media scrum at Sydney airport and said he would push himself hard to make the grade.

"I always put my best foot forward and I'm going to show the world what I'm made of," he said.

"This is real," added the 31-year-old when asked if it was simply a stunt.

"I've said since my last season of track and field that I want to play football and I know what I can do.

"I'm grateful to the Mariners for giving me the opportunity and am happy to call Australia home for now."

Bolt has already tried out with teams in Germany, Norway and South Africa, to no avail, since retiring from athletics last year.

Despite being an eight-time Olympic champion and the fastest man on earth, he admitted to being nervous about what lay ahead in the small town of Gosford, 75 kilometres (47 miles) north of Sydney, where the club is based.

"Nerves will always be there, but I'm more excited than anything else," said the Jamaican, who is set to have his first training session on Tuesday.

Mariners chief executive Shaun Mielekamp has made clear Bolt won't be getting any special treatment, although extra security guards will be on hand and club training sessions moved to a larger venue to accommodate the legions of fans who are expected to turn up to get a glimpse of Bolt.

"The one thing we've been really firm on is that Usain, while trialling for a contract, be treated the same as any player," Mielekamp said this week.

"Obviously, we understand the realities of having somebody of his profile. But (when it comes to football) there will be no advantages.

"And that's what Bolt wants -- this is about his football journey. He's coming here for the right reasons."

Bolt dominated sprinting since taking double individual gold at the Beijing Olympics in 2008. He went on to win a further six Olympic golds and pick up 11 world titles.

Comments
Topics mentioned in this article
Usain Bolt Football Other Sports
Get the latest Cricket news, check out the India cricket schedule, Cricket live score . Like us on Facebook or follow us on Twitter for more sports updates. You can also download the NDTV Cricket app for Android or iOS.