US Arrives in Congested Sao Paulo for FIFA World Cup

For the United States football team, their overnight flight was not as tiring as their journey from the airport to their team hotel which took about 2 hours, 20 minutes. 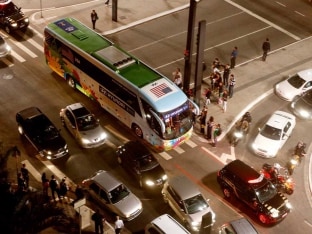 The 4,080-mile overnight flight to Sao Paulo was easy for the U.S. World Cup team.

A 4-mile bus ride from its base hotel through the city's perpetually congested streets to the Americans' training camp was another matter. (Also read: Carnival or chaos? FIFA World Cup poised for kick-off)

"We haven't had any problem, other than the traffic. But other than that, not too bad," goalkeeper Tim Howard said Monday after the Americans arrived in Brazil exactly one week before their World Cup opener against Ghana. (Related read: Jennifer Lopez to perform at World Cup opener)

The U.S. landed from Miami and reached its hotel about 2 hours, 20 minutes later on a bus with the American flag and the slogan "United by team, driven by passion." Police on motorcycles with the Stars and Stripes sticking out of their wheels led the way, and a helicopter hovered.

Four soldiers in fatigues and about two dozen police in riot gear stood outside the hotel, which is adjacent to a park on a tree-lined street. Bleary-eyed players were applauded when they entered the lobby.

What on maps appears to be a short ride to the Sao Paulo Futebol Clube's luxurious Barra Funda training complex took 45 minutes in late-afternoon traffic as a subway strike in its fifth day tightened bottlenecks. At a downtown station, riot police used tear gas against striking workers.

But all was calm around the U.S. team. The Barra Funda facility has three full fields and two small ones - for goalkeepers and for high-intensity workouts. The main field has stands with 704 seats.

There are 20 rooms where players and coaches can sleep or hang out between training sessions, plus a swimming pool, kitchen, dining room, hair salon, and play room with billiards and video games. (Goalline Technology Arrives: Debate Should End at FIFA World Cup)

Coach Jurgen Klinsmann was due to arrive Tuesday. He stayed back in Miami to watch Ghana's 4-0 exhibition win over South Korea.

Just seven hours after the Americans landed, their initial workout took place under the direction of the rest of the staff.

It was 66 degrees under overcast skies, far cooler than the expected temperature for the U.S. games against Ghana, Portugal and Germany, which will be played in northeast Brazil and the Amazon rainforest. Dusk arrived quickly on the late-autumn afternoon as the 5:27 p.m. sunset approached.

This year's flight to the World Cup took 9:21, virtually a shuttle compared with the 17-hour trip from Washington to Johannesburg four years ago.

"Eight-hour flights are like my norm," said Howard, who commutes from Liverpool, England, for World Cup qualifiers in the Americas.

When the U.S. returned to the World Cup in 1990 after a 40-year absence, the team stayed in camp-like bunks at the Italian Olympic training center in the seaside town of Tirrenia, nine miles from Pisa. A substantial upgrade was made when the Americans hosted four years later and checked into the Dana Point Resort in Orange County, California.

At the 1998 tournament in France, they went stir crazy at the Chateau de Pizay, a 12th-century castle surrounded by a vineyard and oak forest in the Beaujolais wine country north of Lyon. There were plainclothes officers strolling among the roosters and geese, and dogs ready to attack upon command.

Then in 2002, less than a year after the 9-11 terrorist attacks at home, they were greeted by 500 police at Incheon International Airport following a 14 1/2 hour flight from New York to South Korea. A 120-member security force was assigned to the Americans, including eight SWAT team members who stayed on the same floor as the players at the Seoul Marriott, where all guests had to enter through magnetometers.

They stayed downtown again in Germany four years later, when there was less visible security. The Americans went rural in South Africa in 2010 when they stayed at the Irene Country Lodge, a 74-room hotel between Johannesburg and Pretoria protected by stone walls and barbed wire. There's a lake on the property, with an adjacent farm filled with cows and roosters.

Now they're back downtown. And with Sao Paulo just one hour ahead of EDT, Howard said the U.S. can take advantage of the propitious time zone.

"The first couple days of preparation are always hard when you can't sleep," he said, "so the fact that we won't have any problem tonight sleeping will be certainly beneficial."