Edinson Cavani scored the winner in a thrilling 3-2 victory over a Lionel Messi-less Argentina but must beat Jordan to secure a place in Brazil. 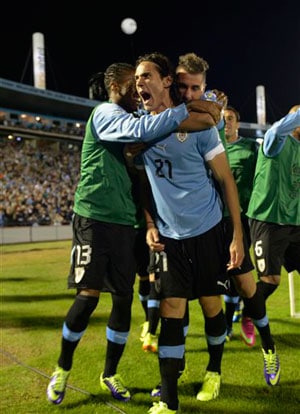 Two-time champions Uruguay served up a thrilling 3-2 win over Argentina on Tuesday but must beat Jordan in next months's intercontinental playoff if they are to reach the World Cup finals.

Uruguay were beaten to the punch by Chile and Ecuador, who claimed the final automatic South American qualifying berths behind regional group winners Argentina and second-placed Colombia.

Saluting his team for a "dignified" end to their regional program, Uruguay coach Oscar Tabarez indicated they must not take Jordan lightly, despite their rivals being ranked 73rd to their own seventh.

"Like all Uruguayans I hope we make it through (but) we would be very wrong to think Jordan cannot cause us problems," Tabarez warned.

Chile beat Ecuador 2-1 in Santiago to ensure third place in the regional table with 28 points from their 16 matches, two behind Colombia and four shy of two-time world champions Argentina.

Despite their loss Ecuador just prised the final automatic slot away from the Uruguayans on goal difference after both landed a points tally of 25.

Uruguay had lost their previous qualifier in Ecuador, compromising their hopes, but signed off with a win and should prove too strong for Asian minnows Jordan.

Cristian Rodriguez put Uruguay into an early lead only for Maxi Rodriguez to drill past Fernando Muslera in the Uruguayan goal three minutes later from an Augusto Fernandez pass.

Muslera brilliantly stopped an Erik Lamela volley as Argentina -- without the injured Lionel Messi -- threatened to wreck any lingering chance the Uruguayans had of sneaking into the final automatic slot.

But the Montevideo crowd were on their feet again as their sky-blue shirted stars again went in front, courtesy of a Luis Suarez penalty -- after the Liverpool man had been bundled to the ground in the box -- his effort just eluded goalkeeper Sergio Romero.

Already assured of top spot, Argentina leveled again with Maxi Rodriguez bagging his second four minutes before the break with a fine run and shimmy past a pair of defenders.

The Uruguayans again rolled their sleeves up, however, and Edinson Cavani, dangerous all night, made it 3-2 six minutes after the restart.

Argentina's Rodriguez almost completed his hattrick with a shot which whizzed just off target as Argentina, shorn of Gonzalo Higuain, Sergio Aguero and Angel Di Maria as well as Messi, suffered only their second loss of the series.

With Uruguayan hopes resting on the playoffs South America faces the prospect of none of the top four at the last Copa America regional championship in 2011 making it to Brazil.

It was in Brazil that Uruguay scored their most famous win, defeating the Selecao on their own hallowed Maracana turf in the 1950 World Cup final, adding to the 'Charruas'' 1930 success.

But now they must endure the playoffs for a fourth consecutive time.

To reach the 2002 finals in Japan and South Korea, Uruguay ended Australia's dreams, then lost to the same opponents on a penalty shootout ahead of the 2006 finals. Four years ago, they beat Costa Rica.

Chile made up for their loss of a three-goal lead in Colombia last weekend to finish the job in front of their own supporters in Santiago.

Paraguay, who lost the Copa America final to Uruguay, and Peru, who came third in the continental showpiece, both crashed and burned in the World Cup qualifiers.

Paraguay, whose 2011 coach Gerardo Martino now coaches Barcelona, endured a miserable campaign featuring just three wins. They miss out on a fifth consecutive finals appearance and closed with a 2-1 home loss to Colombia.

Mario Yepes bagged a brace -- his first a free header, his second scrambled in early in the second half, with Jorge Rojas having drawn first blood for the Paraguayans.

Inter Milan midfielder Fredy Guarin was sent off for Colombia, meaning he will miss their first match in Brazil next June.

Peru and Bolivia wrapped up the final night of action with a 1-1 draw in Lima.

Comments
Topics mentioned in this article
Lionel Messi Maximiliano Rodriguez Bayern Munchen Football
Get the latest updates on ICC T20 Worldcup 2022 and CWG 2022 check out the Schedule, Live Score and Medals Tally. Like us on Facebook or follow us on Twitter for more sports updates. You can also download the NDTV Cricket app for Android or iOS.