Asian champions Japan can move within touching distance of the 2014 World Cup by extending their unbeaten record against Oman on Wednesday, while Iran can leapfrog South Korea in Group A. 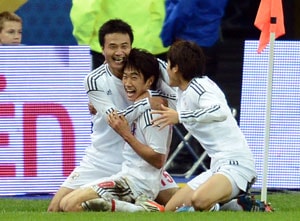 Asian champions Japan can move within touching distance of the 2014 World Cup by extending their unbeaten record against Oman on Wednesday, while Iran can leapfrog South Korea in Group A.

The Blue Samurai are odds-on to reach their fifth consecutive World Cup after picking up 10 points from their first four games in Group B to move five points clear at the halfway mark.

While they cannot confirm their ticket to Brazil this week, a victory at Muscat's Sultan Qaboos Sport Complex would open up an eight-point lead and allow Alberto Zaccheroni's side to start making plans for the summer of 2014.

Japan have never lost in seven World Cup qualifiers against Oman, and beat them 3-0 in Saitama in June. In Muscat, they won 1-0 during their successful campaigns in 1998 and 2006, and drew 1-1 in the 2010 qualifiers.

However, Zaccheroni has left little to chance by naming a strong squad for the match with 13 European-based players including the talismanic Keisuke Honda, who has four goals in Japan's four games thus far.

Kagawa will miss the match with a knee injury but Zaccheroni, whose side also lost 4-0 to Brazil last month, is confident that they can cope with the absence of the attacking midfielder.

"Don't forget that the players that have come in to deputise have done a great job," said the Italian. "Kagawa is not here this time, but I'm sure that whoever fills in for him will do well."

While his team will be favoured to pick up another three points on Wednesday, Zaccheroni remains wary of the threat posed by the Omanis, who beat Jordan 2-1 last month.

"Oman are one of the more organised and balanced teams in the group," he added.

"They sat back and defended in our last match but they will come at us this time. We have to be very focused because they can launch highly accurate counter-attacks."

Wednesday's other Group B game is at the Grand Hamad Stadium in Doha, Qatar, where both Iraq and Jordan will look to get their qualification campaigns back on track after disappointing defeats last month.

The Jordanians lost 2-1 in Oman, while former Asian Cup-winners Iraq, coached by Brazilian legend Zico, allowed Australia to score twice in the final 10 minutes as they lost by the same score to the Socceroos.

In Group A, Iran will look to move ahead of South Korea into top spot with a win against Uzbekistan at the Azadi Stadium.

Carlos Queiroz's side enjoyed a morale-boosting 1-0 win against the Koreans at the same venue last month, despite playing with 10 men for much of the second half following the dismissal of Soleimani Shojaei.

Javad Nekounam's 76th winner was only the second goal scored by the Iranians in four matches in Group A, following Mohammad Reza Khalatbari's break-away stoppage-time effort to beat Uzbekistan 1-0 in June.

Uzbekistan will be keen to avenge that loss, and the central Asian side buoyed their hopes of a first ever World Cup appearance when they beat Qatar 1-0 in Doha last month. A win in Tehran would also put them top of the tight Group A.

There will also be plenty at stake when the group's bottom two sides, Qatar and Lebanon, meet at Doha's Jassim Bin Hamad Stadium, with both capable of putting themselves back in the frame for Brazil.

Comments
Topics mentioned in this article
Football Japan Shinji Kagawa
Get the latest Cricket news, check out the India cricket schedule, Cricket live score . Like us on Facebook or follow us on Twitter for more sports updates. You can also download the NDTV Cricket app for Android or iOS.