Real Madrid are the title holders and also the most successful club in UEFA Champions League history. 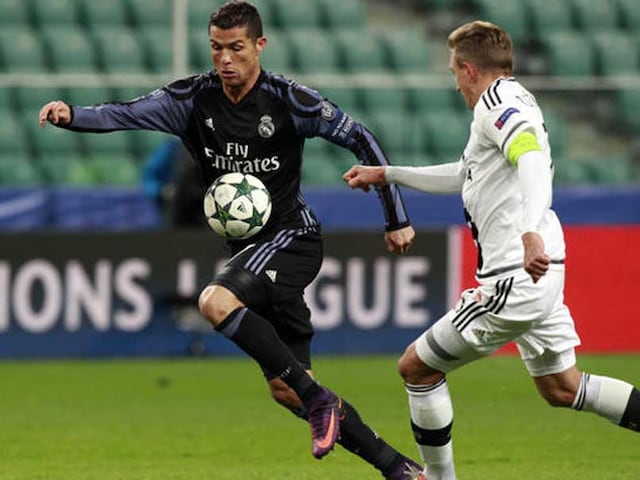 Title-holders Real Madrid and English Premier League winners Leicester must both wait to take their place in the last 16 of the UEFA Champions League after they could only manage draws on Wednesday on a night which saw just Dortmund advance.

Leicester, who had previously rattled off three wins in this their debut season after their unlikely Premier League title success, could only secure a goalless draw at Copenhagen.

That points left the Foxes', who had rattled off three straight wins in this their debut season in the competition, now stand three points clear of Group G rivals Porto who saw off Club Brugge 1-0 in Portugal with a Tomas Silva goal.

"Ten points is good, but not enough. Porto are close behind us. We have our destiny in our hands," said Leicester coach Claudio Ranieri, whose side have yet to concede a goal in the group.

Avoiding a loss at the Parken Stadium means the shock English league title winners are the first debut side to avoid defeat over their opening four encounters.

In Group F, 11-times champions Real Madrid were held 3-3 by Legia Warsaw despite a goal in the opening minute from Gareth Bale.

Karim Benzema added a second but Legia, looking for their first point, roared back with goals from Vadis Odjidja-Ofoe, Miroslav Radovic and Thibault Moulin until Mateo Kovacic levelled for the defending champions.

Dortmund, champions in 1997, thanked a first half goal from Adrian Ramos for a 1-0 home win over Sporting Lisbon which guaranteed their passage from Real's group as they moved onto ten points -- two clear of the Spaniards.

Ramos was playing in place of Pierre-Emerick Aubameyang who was suspended by the club just before kick-off.

Sevilla, Europa League winners in the past three seasons, are as good as through but technically can still be caught by Lyon.

The Spaniards on Wednesday thanked goals from Luciano Vietto, Sergio Escudero, Steven N'Zonzi and Wissam Ben Yedder for a 4-0 thrashing of Group H tailenders Dinamo Zagreb in Spain to move on to ten points.

In the same group, Juventus also missed the chance to go through after they were hit by a late Lyon equaliser from Corentin Tolisso in a 1-1 draw in Turin to slip two points behind Sevilla.

The draw in what was Juve keeper Gianluigi Buffon's 100th Champions League appearance going back 19 years to his Parma days keeps Lyon technically in the hunt on four points.

Elsewhere, Tottenham Hotspur saw their Wembley jinx strike again as they went down 1-0 to Bayer Leverkusen while their White Hart Lane venue undergoes a revamp.

The new Wembley has not proven a lucky venue for Spurs, who have lost four domestic cup encounters and also their opener this season against Monaco at English football's headquarters.

This time, the Londoners succumbed to a Kevin Kampl goal midway through the second half which left Spurs two points adrift of the Germans and four behind Group E leaders Monaco.

"I don't think anyone can work out what is wrong. We are playing well but we have got to finish our chances and have got to keep going," Tottenham midfielder Dele Alli told the BBC.

"It is a matter of finishing off games and getting results."

Monaco, already buoyed by their earlier Wembley win, hammered CSKA Moscow with Colombian Radamel Falcao, coming off two flop spells in England with Manchester United and Chelsea, bagging a brace in the principality.

The Germans' coach Thomas Tuchel admitted that "we really struggled to break them down and made many defensive mistakes -- but we are through after four games."