Wayne Rooney chalked up 200 goals for United with a brace as the English champions cantered to victory at Old Trafford in manager David Moyes's Champions League group-stage debut against Bayer Leverkusen. 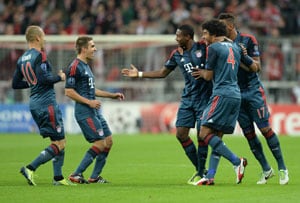 The Bavarians carried on from where they left off last season in the May final at Wembley as Austria left-back David Alaba got Pep Guardiola's side off to a flying start in their Group D clash with a stunning fourth-minute free-kick.

Robben wrapped up the scoring midway through the second half from the excellent Alaba's lofted pass.

Wayne Rooney chalked up 200 goals for United with a brace as the English champions cantered to victory at Old Trafford in manager David Moyes's Champions League group-stage debut against Bayer Leverkusen.

Beaten 4-2, it could have been worse for the visitors as both United's star forwards Rooney and Robin van Persie incredibly missed open goals, although the Germans also hit the woodwork in a thrilling Group A encounter.

A controversial first-half volley from Rooney, in which Patrice Evra was offside before crossing and Antonio Valencia clearly impeded goalkeeper Bernd Leno, gave the hosts the lead before the England striker astonishingly missed an open goal to double the advantage having rounded Leno.

After the break Simon Rolfes's deflected strike, which was going wide until it hit Michael Carrick, brought the Germans level, only for Van Persie's acrobatic volley to restore United's lead.

Rooney made amends for his earlier miss by taking advantage of a defensive error to beat Leno at his near post. Valencia then rounded off a vintage United counter-attack with a sizzling low drive that seemed to go through Leno.

Omer Toprak pulled back another goal following a scramble in the United box from a Leverkusen corner that saw Stefan Reinartz head against the bar, but there was still time for Van Persie to prod wide a Valencia cross and outdo Rooney for worst open-goal miss of the night.

Madrid went two better than United as Cristiano Ronaldo scored a hat-trick in a crushing 6-1 win at Galatasaray in Group B.

Isco opened the scoring for the Spaniards, for whom Gareth Bale made his Champions League debut in the famous white shirt as a second-half substitute, while Karim Benzema netted a brace.

Umut Bulut pulled back a late consolation with the score at 5-0.

In other games Manchester City got their first Champions League win for two years with a comfortable 3-0 success at Viktoria Pilsen in Group D.

Following last season's dismal campaign that saw City draw all three home games while losing their three away encounters, this was a welcome relief to Manuel Pellegrini's men.

After struggling to break down their stubborn hosts in the first half, City hit three in 10 minutes at the start of the second period to settle the affair.

Edin Dzeko opened the scoring from the edge of the box following a Sergio Aguero pass before Yaya Toure let fly from 25 yards.

Aguero bagged the third with a neat turn and shot from Samir Nasri's pass.

Former European Cup winners Benfica began with a 2-0 success over Anderlecht with first-half goals from Filip Djuricic and Luisao.

Meanwhile, in the other game in Group C, big-spending Paris Saint-Germain recorded a handsome 4-1 success at Olympiakos.

But Brazilian-born Italy midfielder Thiago Motta scored with two headers before centre-back Marquinhos celebrated his debut with a goal, although Zlatan Ibrahimovic missed a late penalty.

Italian giants Juventus had to come from behind to snatch a draw at FC Copenhagen in Group B.

Nicolai Jorgensen shot the hosts ahead after 14 minutes but Fabio Quagliarella, enjoying a rare start for the Old Lady of Turin, equalised nine minutes into the second period.

Real Sociedad's return to the Champions League after a 10-year European hiatus ended in defeat as Brazilian Alex Teixeira netted a brace in a 2-0 win for Shakhtar Donetsk in San Sebastian in Group A.