Gareth Bale pushed his case for a starting spot in the Champions League final vs Liverpool in Kiev in two weeks' time with two first-half strikes. 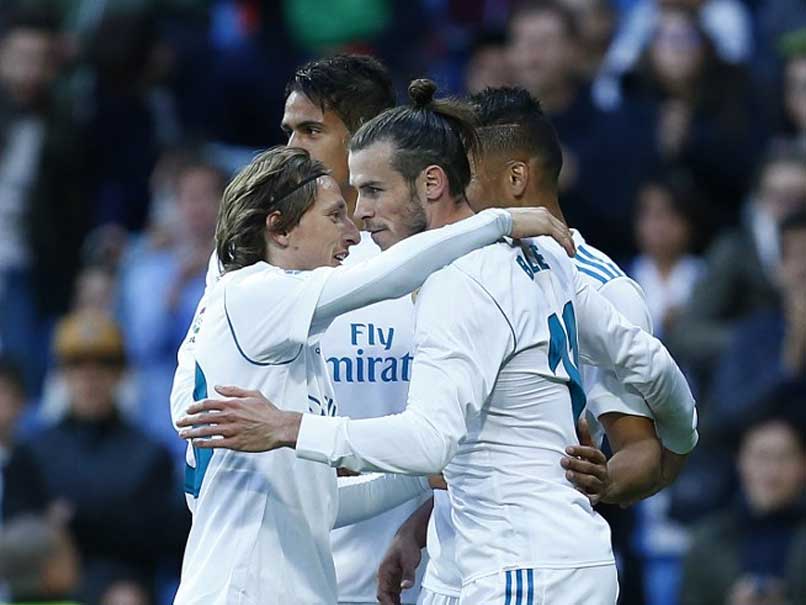 Gareth Bale scored twice as Real Madrid routed Celta Vigo 6-0 on Saturday to give coach Zinedine Zidane a selection headache for the Champions League final. With Cristiano Ronaldo again sidelined with an ankle injury, Welsh star Bale stepped into the limelight with two first-half strikes to push his case for a starting spot in the European showpiece against Liverpool in Kiev in two weeks' time. Bale opened his account after 13 minutes on Saturday, picking up a sweetly-timed through ball from Luka Modric to score.

His second on the half-hour mark saw him dash to the byline before tucking the ball to one side of a defender and then unleashing a sharp left-footed drive into the corner of the net.

Bale celebrated by dedicating his performance to his third son Axel Charles who was born on Tuesday.

"It's better for everyone to be over-motivated and ready," admitted Zidane. "It will be a headache to put a team together for the Champions League final."

Isco made it 3-0 for Real after 32 minutes before Moroccan midfielder Achraf added the fourth, seven minutes into the second half.

On a miserable night for mid-table Celta, Sergi Gomez put through his own net on 74 minutes, leaving German internatonal Toni Kroos to tuck away Real's sixth goal after 81 minutes.

Real stay in third place in the table on 75 points, 15 behind champions Barcelona and three back from city rivals Atletico with one game left to play.

Earlier Saturday, Koke's early goal proved enough for Atletico to claim a 1-0 win at Getafe and remain on course to finish in second place.

The capital club got off to a quick start in the local derby, as Koke collected Antoine Griezmann's pass and drove a low shot into the bottom corner to score his fourth goal of the campaign in the eighth minute.

Getafe missed a chance to stay just two points adrift of seventh-placed Sevilla in the chase to qualify for the Europa League, as Fajr's 77th-minute spot-kick was kept out by Slovenian Oblak.

Simeone admitted the challenge posed by Marseille would be different to that encountered at Getafe.

"We will face a team who are very enthusiastic, with very good attacking players. They are a team that work well at the tactical level," said the Argentine.

Sevilla would have wrapped up a top-seven finish with victory in their derby at Real Betis, but Loren's equaliser with nine minutes to play snatched the home team a 2-2 draw.

Managerless Sevilla, who reached this season's Champions League quarter-finals, now have to beat Alaves next weekend to secure a spot in Europe's second-tier competition.

Comments
Topics mentioned in this article
Real Madrid Liverpool Celta Vigo Cristiano Ronaldo Gareth Bale Zinedine Zidane Football
Get the latest updates on ICC T20 Worldcup 2022 and CWG 2022 check out the Schedule, Live Score and Medals Tally. Like us on Facebook or follow us on Twitter for more sports updates. You can also download the NDTV Cricket app for Android or iOS.