Tito Vilanova to go to US for tests on throat

Vilanova got his second tumor removed last December. Following that surgery in Barcelona, he spent 10 weeks receiving treatment at a New York hospital. 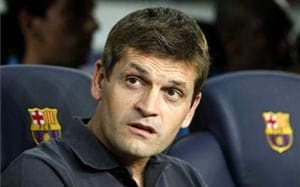 Barcelona coach Tito Vilanova says he will travel to New York for a short checkup on his throat after having a tumor removed last December.

It was the second tumor on a saliva gland he has had removed in two years.

Vilanova said on Sunday that "tomorrow I leave for New York and I won't return until Thursday. It's to do tests. In this process you have to check everything."

Comments
Topics mentioned in this article
Football Barcelona Real Madrid
Get the latest updates on ICC T20 Worldcup 2022 and CWG 2022 check out the Schedule, Live Score and Medals Tally. Like us on Facebook or follow us on Twitter for more sports updates. You can also download the NDTV Cricket app for Android or iOS.