Robert Moreno's Spain are top of Group F on 20 points after drawing their last two matches. 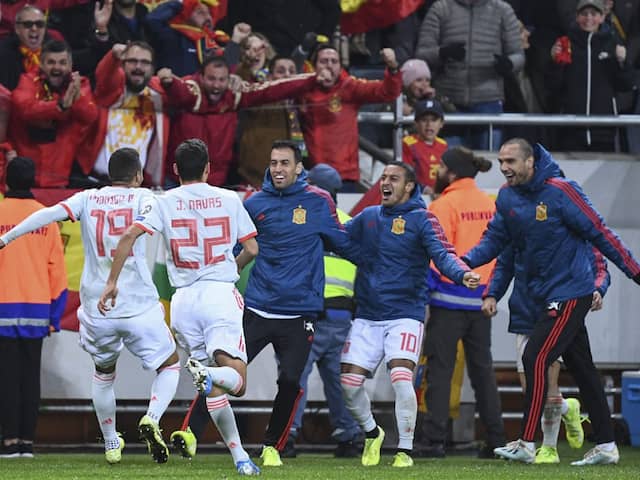 Rodrigo Moreno fired Spain into Euro 2020 with a last-gasp equaliser in Sweden while the Republic of Ireland's chances of reaching the finals are still in the balance after they fell 2-0 in Switzerland. Spain became the sixth team to qualify for next summer's tournament thanks to Rodrigo, who came off the bench to score a dramatic injury-time leveller in a 1-1 draw in Stockholm, sparking wild celebrations on the touchline. "Qualification is a must for a team like Spain but achieving it still has value," said Moreno. "It releases the pressure and gives us time to work."

Robert Moreno's side are top of Group F on 20 points after drawing their last two matches. They are five ahead of Sweden and six above Romania, who missed the chance to take second spot when Norway's Alexander Sorloth snatched a late 1-1 draw in Bucharest.

However it was a far from vintage display from Spain, who started brightly but faded as the match wore on against the lively hosts, who were distraught after missing out on a famous victory right at the death.

A celebratory night was tempered slightly by the loss of goalkeeper David de Gea to a thigh injury in the second half, although that will worry his club Manchester United more ahead their meeting with Premier League leaders Liverpool this weekend.

In Group D, Haris Seferovic's early strike and Shane Duffy's late own goal kept Switzerland's hopes of automatic qualification alive with a 2-0 victory over the Republic of Ireland.

The win in Geneva means the Swiss are just a point behind group leaders Ireland and Denmark with two matches remaining in their campaign, compared to just the one for the Irish, who host the Danes on November 18 needing a win to guarantee qualification.

"It's a cup final. Beat Denmark to reach Euro 2020. I would have taken that at the start and I'll take it now," said the Republic's coach Mick McCarthy.

The Swiss, who also have the better of the head-to-head record with the Irish as the two teams drew 1-1 in September, take on group minnows Georgia and Gibraltar in their final two games.

"The result doesn't mean a lot in the group, we still need to get results in our next two games. If we get the points we need against Georgia and Gibraltar we can turn our attentions to Euro 2020," said Switzerland coach Vladimir Petkovic.

Finland inched closer to qualifying for their first ever European Championships after Teemu Pukki took his qualifying tally to seven in eight matches with a double that helped Finland sweep aside Armenia 3-0 in Turku.

Fredrik Jensen gave the Finns a 31th minute lead. Norwich City striker Pukki then scored just after the hour and got his second two minutes from the end with a neat dinked finish.

Markku Kanerva's side stay nine points behind Group J winners Italy, who maintained their 100 percent record with an eighth straight win, 5-0 against Liechtenstein.

Finland need a win over rock-bottom Liechtenstein to qualify for their first major tournament after fourth-placed Bosnia & Herzegovina lost 2-1 in Greece with an 88th-minute own goal from Adnan Kovacevic.

Israel kept their hopes of qualifying from Group G alive after seeing off Latvia 3-1 as Eran Zahavi scored his 11th goal of the qualifying campaign.

Andi Herzog's side are level on 11 points with North Macedonia and Slovenia and five behind second-place Austria, meaning they still have a chance with two games remaining.