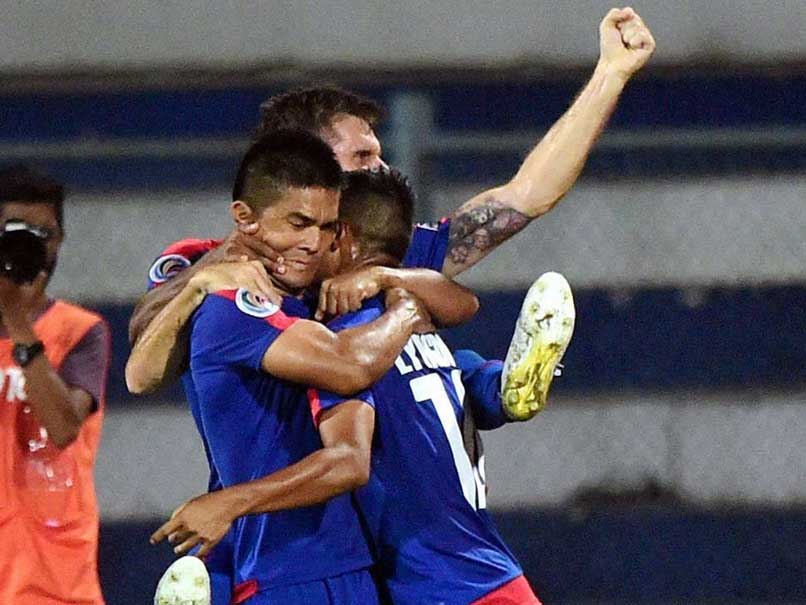 The two-time I-League champions won 4-2 on aggregate and now will take on Iraqi club Al-Quwa Al-Jawiya in the final on November 5 in Doha, Qatar.

Bengaluru remained indebted to skipper and mercurial forward Sunil Chhetri who scored a brace on either side of halftime with defender Juan Antonio adding gloss to the scoreline after the visitors had taken the lead through Safiq Bin Rahim early on in the game at the Kanteerava Stadium.

Johor scored as early as in the 11th minute, skipper Rahim heading in from close after Bengaluru goalkeeper Amrinder Singh failed to parry away Safee Ali's venomous strike.

Despite taking the lead, the hosts looked comfortable in midfield and should have taken the lead when Chhetri was denied by the crossbar after a good touch from the Johor keeper initially saw the ball fall back out to play from where Eugeneson Lyngdoh hammered a low shot at goal which Izham Mohammed punched away.

The rebound fell to the skipper on the edge of the six-yard box. Trying to power the ball into the top of goal, the veteran forward found the horizontal bar.

Chhetri though found the net minutes later, nodding in a free header off a Lyngdoh corner, which was won by Chhetri himself.

Both sides went into the break at 1-1.

BFC dominated proceedings after the restart with Chhetri and Alwyn George coming close to taking the lead in the tie.

In the 66th minute, the Kanteerava erupted in joy as Chhetri -- in imperious form -- scored a goal of the highest quality by making space for himself from well outside the box to beat Izham all ends up.

Centre-back Juanan, filling in the void left by Curtis Osano this season, joined the act nine minutes later turning in Lyngdoh's free kick with aplomb to net his first goal for the southern outfit.

With the tie and the semi-fnal all but won and separated by a few minutes from history being rewritten in Indian football, the I-League champions brought on full-back Keegan Pereira replacing Chhetri in a tactical move.

The farthest any Indian club has reached before in the continental meet -- an equivalent to the Europa League -- is the semi-final where both Dempo SC and East Bengal lost.

Comments
Topics mentioned in this article
Sunil Chhetri , 1984-08-03 , India Football , 1900-01-01 ,
Get the latest updates on Fifa Worldcup 2022 and check out  Fifa World Cup Schedule, Stats and Live Cricket Score. Like us on Facebook or follow us on Twitter for more sports updates. You can also download the NDTV Cricket app for Android or iOS.