Stoke City secured their first FA Cup semi-final appearance since 1972 with a 2-1 win against West Ham in the quarter-finals at the Britannia Stadium on Sunday. 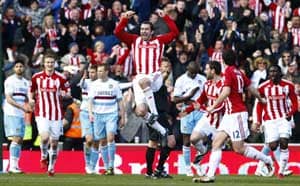 Stoke City secured their first FA Cup semi-final appearance since 1972 with a 2-1 win against West Ham in the quarter-finals at the Britannia Stadium on Sunday.

Tony Pulis's side were beaten 3-0 by the Hammers in the Premier League last weekend, but they got their revenge, and earned a trip to Wembley in the process, thanks to Danny Higginbotham's second half winner.

Stoke took the lead in the 12th minute with yet another goal from one of Rory Delap's trademark long throws.

The Hammers defence couldn't deal with Delap's flat throw and Robert Huth muscled his way through to power a header past Robert Green.

Referee Mike Jones and his linesman failed to spot that Frederic Piquionne had controlled Thomas Hitzlsperger's pass with his arm and the French striker was allowed to surge clear of Huth and clip in the equaliser.

Jones ignored the furious protests of Stoke's players but he gave the hosts a chance to regain the lead with another poor decision when he ruled that Scott Parker had fouled Matthew Etherington in the penalty area in the 46th minute.

Replays showed Parker had actually pulled out of the challenge, although Green came to West Ham's rescue anyway as he kept out Etherington's spot-kick.

Despite that save, Green still finished as the villain. Higginbotham's 63rd minute free-kick was powerfully struck but Green should have done better than allow it to creep over the line.

Manchester United booked their semi-final spot with a 2-0 win over Arsenal on Saturday after Bolton defeated Birmingham 3-2 to reach the last four for the first time since 1975.

Comments
Topics mentioned in this article
Football Stoke City Manchester City Bolton Wanderers Manchester United Arsenal
Get the latest updates on ICC T20 Worldcup 2022 and CWG 2022 check out the Schedule, Live Score and Medals Tally. Like us on Facebook or follow us on Twitter for more sports updates. You can also download the NDTV Cricket app for Android or iOS.