Stephen El Shaarawy scored one goal and set up another as Roma enjoyed its seventh successive league win. It was El Shaarawy's fifth goal in six matches for Roma. 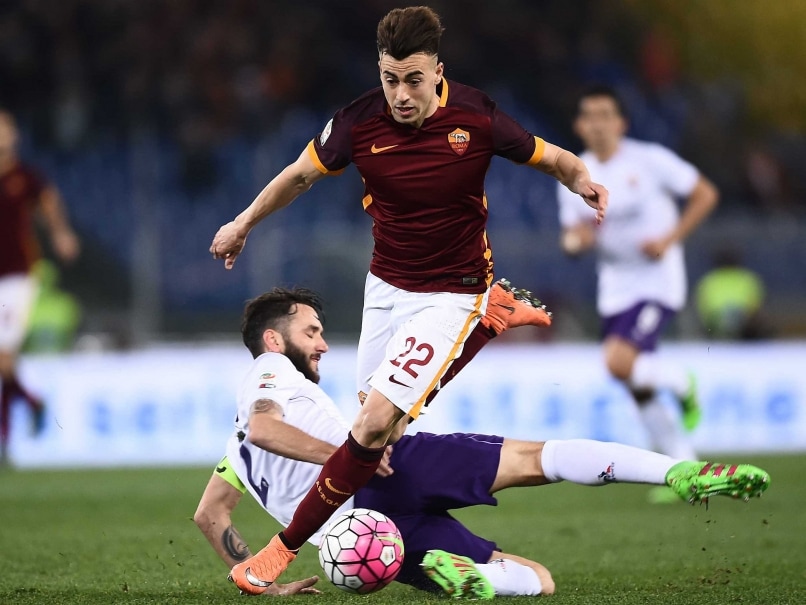 Stephen El Shaarawy during Roma's game with Fiorentina in Serie A.© AFP
Rome:

The Italy forward scored one goal and set up another as Roma enjoyed its seventh successive league win. It was El Shaarawy's fifth goal in six matches for Roma.

Perotti also hit the post in a sparkling first half for Roma.

The capital side is now just two points behind second-place Napoli, which hosts Chievo Verona Saturday. It will be a boost ahead of the second leg of its Champions League last-16 tie against Real Madrid, with Roma 2-0 down.

"We want to try to play football and if possible have fun and make others have fun," Roma coach Luciano Spalletti said. "When you get certain results everything becomes more enjoyable, but we need to keep our feet on the ground and go forward.

"Tonight we had a great match against a really great opponent."

Josip Ilicic converted a penalty for Fiorentina on the stroke of halftime.

"Today everything which could have gone wrong did, let's hope we've got it all over with in just one go," Fiorentina coach Paulo Sousa said. "But we shouldn't take anything away from Spalletti and his Roma team, they had a great game, and played at a really high level in attack."

Substitute Francesco Totti, who came on to a standing ovation, almost scored a fifth for Roma in stoppage time but his effort scraped the post.

Roma took control of the game midway through the first half. It went in front when Miralem Pjanic sent a ball through to Salah who crossed from the right for El Shaarawy to tap in.

It was almost worse for Fiorentina moments later but Perotti's shot crashed off the left upright.

Perotti did get on the scoresheet in the 38th, slotting into the back of the net following a lovely through ball from El Shaarawy, who had moved away from his marker.

Fiorentina pulled one back with Ilicic's powerful penalty after Cristian Tello had been fouled by Lucas Digne.

Roma restored its three-goal advantage shortly before the hour after a great ball over the top from Pjanic which Salah fired home between the legs of Fiorentina goalkeeper Ciprian Tatarusanu.

Comments
Topics mentioned in this article
Stephan El Shaarawy Football
Get the latest updates on ICC T20 Worldcup 2022 and CWG 2022 check out the Schedule, Live Score and Medals Tally. Like us on Facebook or follow us on Twitter for more sports updates. You can also download the NDTV Cricket app for Android or iOS.