'Shocked' Bayern try to pick up pieces at Freiburg

Bayern Munich captain Philipp Lahm says his team must pick up the pieces of their wrecked season at Freiburg on Saturday as they come to terms with their disappointing Champions League exit. 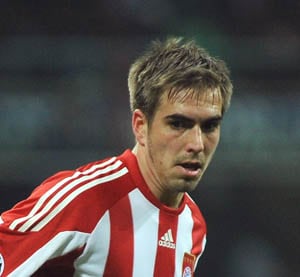 Bayern Munich captain Philipp Lahm says his team must pick up the pieces of their wrecked season at Freiburg on Saturday as they come to terms with their disappointing Champions League exit.

Bayern were floored by Inter Milan on Tuesday, the Italians' late goal sealing a 3-2 win which put the holders into the Champions League quarter-finals on the away-goal rule after it finished 3-3 on aggregate.

Defending Bundesliga champions Bayern are 16 points behind leaders Dortmund, who host fifth-placed Mainz on Saturday night, and seven points from second which will give them a Champions League place next season.

Having been dumped from both the German Cup and now the Champions League, Bayern face the prospect of a season without silverware.

"We have to try to put Tuesday behind us, we were determined to make the next round, but conceding a goal in the 88th minute always leaves a very, very bitter taste.

"We're in action again at the weekend, and there's a lot still at stake in the Bundesliga.

"We want to play in the Champions League again next season.

"It's still wide open, but it won't be easy against Freiburg, especially after you've had a shock. We're in a difficult and critical position."

Bayern are used to playing for titles, but second-best will have to be good enough for the Bavarian giants.

"The normal state of affairs at Bayern is that we're in the running for honours right to the end of the season, but the 'only' thing we're aiming at now is qualifying for the Champions League," said Lahm.

"But in our recent matches, the team has showed its desire. Our commitment and our attitude have been right."

The 2012 Champions League final will be staged at Munich's Allianz Arena which adds extra motivation in Bayern's bid to take points at Freiburg.

"A number of us have played in the UEFA Cup and the Europa League, but don't want to again," admitted Lahm.

"We all want to contest the Champions League, that's our motivation, but Bayern would normally be competing for more than just a Champions League qualifying place," he said.

Schalke 04, who will discover Friday who they face in the Champions League quarter-finals, are at second-placed Leverkusen on Sunday with caretaker coach Sepp Eichkorn in charge.

The Royal Blues sacked coach Felix Magath on Wednesday and former Hoffenheim boss Ralf Rangnick is expected to be named as his replacement on Monday.

Things are getting tight at the bottom of the table as former champions VfL Wolfsburg, Borussia Moenchengladbach, VfB Stuttgart and Werder Bremen are all playing for their Bundesliga survival this weekend with relegation looming.

Just six points separate Bremen, 12th in the league, from bottom side 'Gladbach with eight games left until the last day of the season on May 14.

This Sunday, second-from-bottom Wolfsburg, who were crowned German champions in May 2009, are at 2007 champions Stuttgart while on Friday bottom side Moenchengladbach host Kaiserslautern, who are just above the drop zone.

Any of the bottom six can go down, but 'Gladbach, Wolfsburg and Hamburg-based St Pauli are the unlucky trio currently filling the last three spots.

The biggest fall from grace has been for Wolfsburg who sacked ex-England coach Steve McClaren in February, but are still in free fall.

"We need to fight for every point," said coach Pierre Littbarski after four defeats in five games since he took charge.

Comments
Topics mentioned in this article
Football Papiss Cisse SC Freiburg Bayer Leverkusen VfL Wolfsburg Bayern Munchen Blackburn Rovers
Get the latest updates on ICC T20 Worldcup 2022 and CWG 2022 check out the Schedule, Live Score and Medals Tally. Like us on Facebook or follow us on Twitter for more sports updates. You can also download the NDTV Cricket app for Android or iOS.