United had the better of the early exchanges, Robin van Persie, who was returning to the starting XI for the first time since the opening group win against Bayer Leverkusen, curling a shot high over the bar in the ninth minute after a super ball by Tom Cleverley. 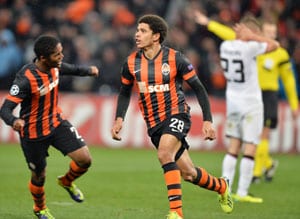 The draw -- which sees Shakhtar remain unbeaten at home to English teams -- leaves both sides unbeaten after two games with four points.

The point -- United took the lead through Danny Welbeck early in the first-half -- will ease some of the pressure on manager David Moyes, whose side have made their worst start to a league season since 1989.

"That was a good point coming here and getting one isn't easy," said Moyes, who was handed the unenviable job of replacing the legendary Alex Ferguson as manager when he stepped down at the end of last season.

"Shakhtar have a great record here so to get a point is no mean achievement.

"I thought the team stood up well tonight and we defended very well."

Shakhtar head coach Mircea Lucescu said he considered the draw to be a fair result.

"We allowed Manchester to score an early goal after a series of mistakes in defence," he said.

"We had to chase them down to put pressure on them so we could equalise.

"In the late stages we took more risks but luckily we managed to equalise.

"I consider the draw to be a fair result, which gives both sides good chances to make it into the knockout stage."

Moyes, who made his reputation by keeping Everton competitive despite having little money to spend, said that the result did not have any greater significance.

"It is another point in the Champions League that is all, nothing more. It doesn't take us any further along the line."

United had the better of the early exchanges, Robin van Persie, who was returning to the starting XI for the first time since the opening group win against Bayer Leverkusen, curling a shot high over the bar in the ninth minute after a super ball by Tom Cleverley.

However, that sparked the hosts into life and for several minutes they dominated play, although, clever approach play was not rewarded with shots on target.

Cleverley, though, was a little fortunate to get the benefit of the doubt from Czech referee Pavel Kravlovec when he brought down Alex Teixeira in the box.

United went ahead shortly afterwards as Marouane Fellaini got to the byline and his low cross evaded a Shakhtar defender and fell to Welbeck, who made no mistake from close range.

Shakhtar harried and pressed United for the remainder of the half but to no avail, their final ball proving to be either too ambitious or inaccurate.

However, the hosts kept at their task, while United went into their shell and created very little, Moyes sending on Ryan Giggs for a Champions League record 145th appearance to try and add some urgency to their play.

However, it was Shakhtar who finally struck, Taison making no mistake when the ball fell kindly to the 25-year-old as it rebounded off Nemanja Vidic to put them level 14 minutes from time -- the hosts reliance on Brazilians exemplified by the fact of their last 15 Champions League goals 14 have been by players from Brazil.

United were left to hang on grimly for a point and had goalkeeper David de Gea to thank for leaving Ukraine with a point, as the Spaniard saved a deflection off United defender Chris Smalling that was goalbound.

Comments
Topics mentioned in this article
Football Alex Ferguson Wayne Rooney Arsenal Chelsea Shakhtar Donetsk Manchester United
Get the latest Cricket news, check out the India cricket schedule, Cricket live score . Like us on Facebook or follow us on Twitter for more sports updates. You can also download the NDTV Cricket app for Android or iOS.