Vucinic scored twice in the second half to give Juve, who were playing without Andrea Barzagli, Giorgio Chiellini and 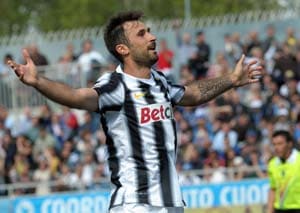 A brace from Mirko Vucinic helped Juventus to a 2-1 victory over a heroic Pescara and a 12-point lead over Napoli in Italy's Serie A on Saturday.

Four days ahead of a crucial Champions League quarter-final second leg at home to Bayern Munich, Juventus - with 59 goals boasting the league's best attack prior to this fixture - were up against the league's bottom side, who had shipped 61 in 30 games.

And the loss of defenders Andrea Barzagli and Giorgio Chiellini, through suspension, and 'keeper Gianluigi Buffon, who was suffering from flu, never looked likely to give the visitors any hope of scoring an upset.

Under attack throughout, Pescara had 'keeper Ivan Pelizzoli to thank for keeping a clean sheet until Vucinic scored from the penalty spot on 72 minutes.

The Montenegrin added a second minutes later, however the hosts were pegged back by a superb 25-metre drive from Emmanuel Cascione which sailed over the flailing arms of Marco Storari and into the net on 83 minutes.

Juve coach Antonio Conte expressed his relief that his side had come through unscathed: "It was the typical cursed game. Pelizzoli was tremendous so coming away with all three points is certainly a bonus."

With Bayern on the horizon and Vucinic in fine form having missed most of the first leg through flu, Conte added: "It was important for him to score today, especially given we have Bayern to play in midweek."

Juve started strongly and should have had several goals in the first half hour as they set up camp in Pescara's end.

However attempts by Emanuele Giaccherini, Sebastian Giovinco, Vucinic and then Vidal all came to nothing against a resolute Pelizzoli.

Juve went in for the break frustrated but that was to continue after the restart, with Vucinic missing a great chance for the opener from Kwadwo Asamoah's cross when he spun his volley wide with the goal at his mercy.

Striker Fabio Quagliarella, who replaced Giovinco on the half hour, then forced a parry from Pelizzoli after volleying a wayward header from a defender.

Vidal then tested Pelizzoli with a drive through traffic from 20 metres but his effort was straight at the keeper. Moments later Pelizzoli got down low to block Vucinic's angled drive from cloe range.

From a corner Leonardo Bonucci rose to meet the ball but his header flashed wide.

Juve came even closer when Vucinic worked the ball through the defence and sent Giaccherini through on the right, but his pass across goal towards Quagliarella was thwarted by a diving Pelizzoli.

Juve had to rely on a penalty to finally beat the 'keeper, Vucinic stepping up to slot home after Giuseppe Rizzo saw red for impeding Vidal in the box.

Vucinic celebrated in unconventional fashion, taking off his shorts - instead of his shirt - and waving them around his head, earning him a yellow card.

Juve looked to be heading for more when Alessandro Matri, who replaced Vucinic late on, fired wide from a good position.

Napoli can restore their nine-point deficit when they host Genoa on Sunday, when third-placed Milan are away at Fiorentina.

In Saturday's late game Torino secured a share of the points on the stroke of full time when Rolando Bianchi came off the bench to level from Danil D'Ambrosio's pass.

The late winner was all the more painful for the hosts, who had taken the lead only minutes earlier through substitute midfielder Tiberio Guarente.