Serie A leaders Juventus continued to stutter towards a ninth straight league title as they threw away a two-goal lead before settling for a thrilling 3-3 draw at Sassuolo on Wednesday. 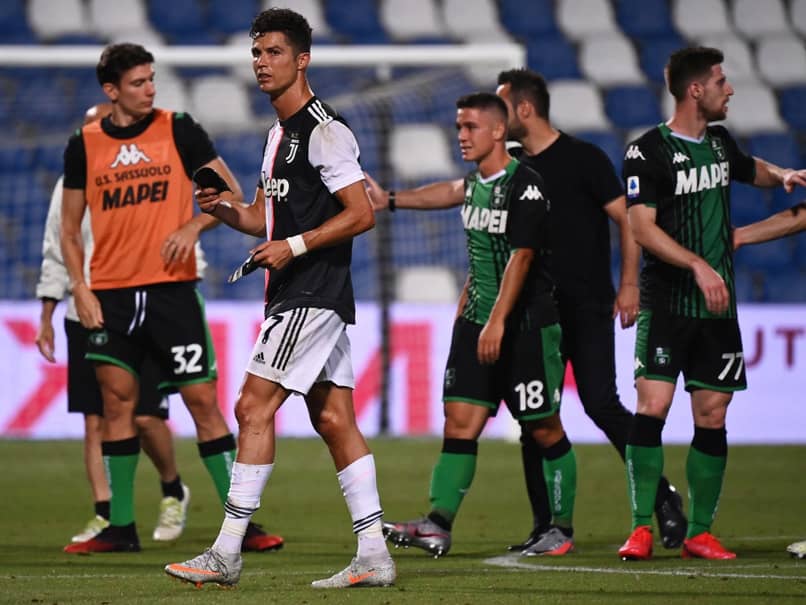 Juventus are seven points ahead of Atalanta with five games to play in Serie A.© AFP

Serie A leaders Juventus continued to stutter towards a ninth straight league title as they threw away a two-goal lead before settling for a thrilling 3-3 draw at Sassuolo on Wednesday. Juventus are seven points ahead of Atalanta, who thrashed Brescia 6-2 on Tuesday, with five games left to play after their winless run was extended to three matches. Lazio missed the chance to retake second and cut the gap to Juve to six points with a goalless draw against Udinese and are one point behind Atalanta in third.

"A coach demands continuity and at this moment we don't have it physically and mentally," said Juventus coach Maurizio Sarri.

"We had very good moments that alternated with difficult moments.

"It should also be said that we are facing teams that arrive in great shape, such as Atalanta and Sassuolo. We have to solve the problem of these ups and downs."

Juventus were two goals up within 12 minutes thanks to Brazilian Danilo and Gonzalo Higuain.

But despite the return of captain Giorgio Chiellini, the Turin giants showed signs of weakness in defence again and have now conceded 11 goals in five games.

Sassuolo took advantage, with Filip Djuricic pulling one back for the hosts just before the half-hour mark, before Domenico Berardi curled in a free-kick on 50 minutes and Francesco Caputo blasted in a third four minutes later.

Alex Sandro headed Juventus level with 26 minutes to play, but the defending champions had goalkeeper Wojciech Szczesny to thank for securing a point as the Pole pulled off a string of late saves.

Juventus lost 4-2 to AC Milan and needed a 90th-minute Cristiano Ronaldo penalty to snatch a 2-2 draw with Atalanta in their previous two games.

The Turin giants next host Lazio on Monday after Atalanta visit Verona at the weekend looking to cut the gap to four points.

"Now we must not do calculations but only think game by game," added Sarri.

Inter Milan still harbour hopes of a late title push and could jump from fourth to second, six points behind Juve, when they travel to face SPAL on Thursday.

Simone Inzaghi's Lazio, who were only one point adrift when Serie A returned following the coronavirus lockdown, were held by Udinese after three consecutive defeats, as their hopes of a first Scudetto in two decades suffered another blow.

City rivals Roma, in fifth, continued their good form with a 2-1 win over ninth-placed Hellas Verona thanks to a Jordan Veretout penalty and an Edin Dzeko header.

Roma are four points ahead of Napoli and AC Milan.

Milan close in on Europe

AC Milan boosted their Europa League hopes with a 3-1 comeback win over Parma to move level on points with sixth-placed Napoli who were held 1-1 at Bologna.

Stefano Pioli's Milan are unbeaten in seven league games since the resumption.

Goals from Franck Kessie, Alessio Romagnoli and Hakan Calhanoglu saw off 12th-placed Parma who had taken the lead thanks to a Jasmin Kurtic goal just before the break at the San Siro.

Milan sit six points clear of eighth-placed Sassuolo, with seventh likely to be enough for a Europa League spot due to Napoli's Italian Cup triumph.

Napoli coach Gennaro Gattuso said he was worried ahead of the Champions League last-16 second leg against Barcelona after his side let a lead slip against Bologna.

But in-form Musa Barrow grabbed the equaliser 10 minutes from time for the hosts.

"We have to play to prepare for Barcelona and with performances like this we will not go anywhere," said Gattuso.

Sampdoria moved further away from the relegation zone with Federico Bonazzoli scoring a brace in a 3-0 win over 11th-placed Cagliari.

AC Milan Football
Get the latest updates on India vs Australia Series, check out the India vs Australia Schedule for 2020-21 and Ind vs Aus live score . Like us on Facebook or follow us on Twitter for more sports updates. You can also download the NDTV Cricket app for Android or iOS.