AC Milan are now only five points behind leaders Juventus, held 1-1 at Sassuolo on Saturday, while Roma put three unanswered goals past Chievo to reinforce their grip on second spot and reduce their deficit to a point. 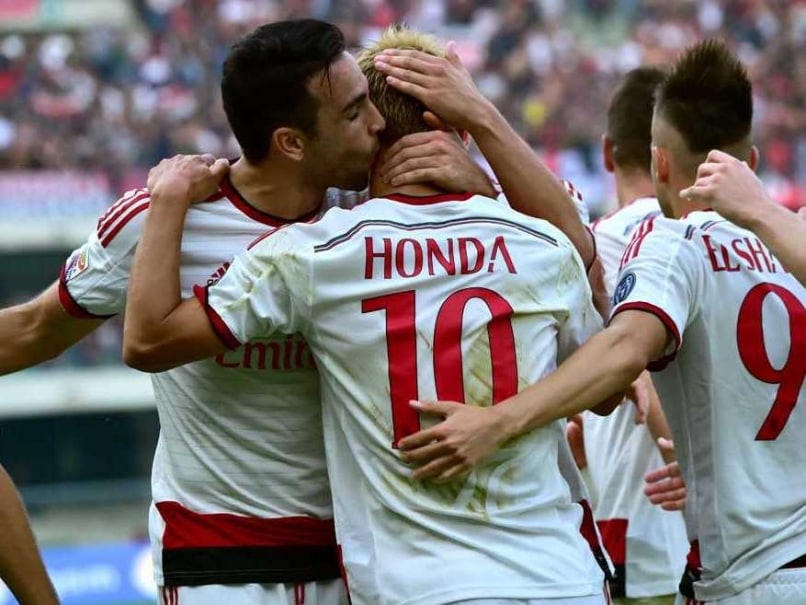 AC Milan's players celebrate with Keisuke Honda after he scored for them in their Serie A match against Verona.© AFP
Milan:

Japan international Keisuke Honda struck a brace in a 3-1 win at Verona to go top of the Serie A scoring charts on Sunday as AC Milan moved up to fourth.

Milan travelled to the Bentegodi stadium looking for their second successive win having accounted for another Verona-based side, Chievo, two weeks ago.

The visitors were missing injured French forward Jeremy Menez, but Honda was in scintillating form.

"He's the consummate professional and a great player, I already said that back in August," Milan coach Filippo Inzaghi told Sky Sport Italia.

"He rarely misses a scoring chance and deserves all the credit he gets."

Inzaghi added: "We're happy, these were three really important points, but we still have improvements to make especially in defence."

Milan were given a helping hand in the 21st minute when Brazilian Rafael Marques, one half of a centre-back pairing which also included Mexican international Rafa Marquez, skewed a volley into his own net from Ignazio Abate's cross from the right.

"It can happen to anyone," said Verona coach Andrea Mandorlini.

Milan were 2-0 up six minutes later when Stephan El Shaarawy, given a rare start on the left of a three-man forward line spearheaded by Spaniard Fernando Torres, found Honda in space on the right with a long ball from midfield.

Honda had time to run unmarked towards goal before curling a first-time shot past Verona 'keeper Rafael.

Verona striker Luca Toni came close to reducing the arrears with an acrobatic effort minutes later but Christian Abbiati pulled off a remarkable save to parry at his near post.

Abbiati was at full stretch again just after the half hour to push away Bosko Jankovic's header.

If Verona's defence had been conspicuously absent at Honda's first goal, they were even more so 10 minutes after the restart when the Japan international was left in acres of space.

French defender Adil Rami fired a low pass from just over the halfway line and Honda ran in practically unhindered to dink another left-footed shot over Rafael.

Verona grabbed a late consolation when Nico Lopez powered past Sulley Muntari before cutting in to beat Abbiati.

Milan are now only five points behind leaders Juventus, held 1-1 at Sassuolo on Saturday, while Roma put three unanswered goals past Chievo to reinforce their grip on second spot and reduce their deficit to a point.

Sampdoria are three points behind Roma in third after they drew 2-2 at Cagliari despite Manolo Gabbiadini and Spanish midfielder Pedro Obiang giving them a 2-0 interval lead.

"We didn't draw, we lost," Samp coach Sinisa Mihajlovic told Sky. "We can't afford to give away points like we did today.

"The only positive is that we're still in third place and still unbeaten."

Cagliari were given hope 13 minutes into the second half when Fabrizio Cacciatore saw red for a second bookable offence and defender Danilo Avelar stepped up to slam the resulting spot-kick into the top right-hand corner of Emiliano Viviano's net.

"It wasn't easy to claw back two goals from Sampdoria," said Sau, who now has three goals in seven games.

Elswhere, Palermo moved off bottom spot after Giancarlo Gonzalez's precision header secured a 2-1 home win for the Sicilians against Cesena.

Fabio Quagliarella's 62nd-minute strike was enough to secure a 1-0 home win for Torino against Udinese, while in Bergamo Yiadom Boakye bundled home a 90th-minute winner to secure a 1-0 win for Atalanta against Parma.

Parma now sit bottom of Serie A with six defeats and just one win in seven games.

Comments
Topics mentioned in this article
AC Milan Verona Keisuke Honda Football
Get the latest updates on ICC T20 Worldcup 2022, check out the Schedule and Live Score. Like us on Facebook or follow us on Twitter for more sports updates. You can also download the NDTV Cricket app for Android or iOS.