Despite Juventus holding a 2-0 lead at half-time following a Carlos Tevez penalty and a strike from Paul Pogba, the champions crumbled during 14 second-half minutes in which 'La Viola' staged a remarkable comeback. 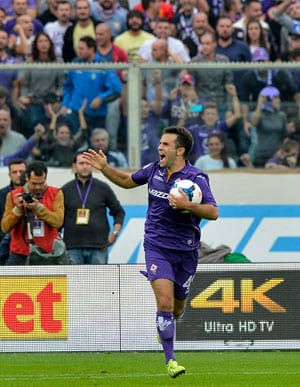 Giuseppe Rossi scored a hat-trick for Fiorentina in a stunning come-from-behind 4-2 win over Juventus on Sunday, which helped Roma maintain their five-point lead at the top of Serie A.

Roma's 2-0 defeat of Napoli on Friday opened up a five-point cushion over both Rafael Benitez's side and Juventus ahead of the latter's visit to Florence.

And despite Juventus holding a 2-0 lead at half-time following a Carlos Tevez penalty and a strike from Paul Pogba, the champions crumbled during 14 second-half minutes in which 'La Viola' staged a remarkable comeback.

Roma now have a maximum 24 points from eight wins with Napoli back up to second with Juventus, suffering their first defeat of the season, slipping one place to third on goal difference.

Juventus coach Antonio Conte insisted his side had not been sidetracked by thoughts of their Champions League trip to Real Madrid on Wednesday.

But while claiming Juve dominated throughout, he admitted his side were unrecognisable late in the second half.

"We dominated them in every department and had the game wrapped up," said Conte.

"Then the unimaginable happened -- we lost a game that we were dominating. Those 10 minutes changed everything and we conceded some strange goals. It just wasn't like us."

Fiorentina coach Vincenzo Montella said: "This is the best result ever. It's already difficult to score against Juve, so putting four past them gives us immense satisfaction."

Fiorentina's win was not the only shock of the day, however, with Atalanta securing a precious 2-1 win at home to Lazio thanks to German Denis's 84th minute winner.

Early season surprise packages Verona kept their place in the top five thanks to a 3-2 win over Parma, helped by a pair of two penalties from Jorginho.

Verona, one of three promoted teams from Serie B, now sit fourth, eight points behind Roma and one ahead of Fiorentina, who dropped to sixth with 10-man Inter Milan moving the other way after a dramatic 3-3 draw away to Torino.

In their first match since Indonesian tycoon Erick Thohir bought a majority 70 percent share in the club, Inter were left with a mountain to climb after just six minutes.

Eight minutes after the restart Ciro Immobile put Torino back in front only for Rodrigo Palacio to hit a brace, both goals coming after good work from Ishak Belfodil, to give Inter a 3-2 lead with 19 minutes remaining.

Inter looked to have done enough to seal the win but after Torino won a free kick at the death, Nicola Bellomo curled the ball beyond a packed area and inside the far corner of Carrizo's net.

He beat Gianluigi Buffon from the penalty spot in the 66th minute and levelled with a superbly-struck angled shot minutes later.

Just as Arturo Vidal, who started on the bench after missing training due to a late return from Chile, was preparing to replace Claudio Marchisio for the final quarter hour, Fiorentina took the lead.

Unmarked Joaquin beat Buffon with a precise right-foot shot at his near post to claim his first goal in Serie A and Rossi grabbed his third when Fiorentina caught Juve sleeping on the counter-attack.