Roma finished the match with 10 men after defender Federico Balzaretti saw red for a second rash challenge of the game in the final 10 minutes, but by then the damage had been done. 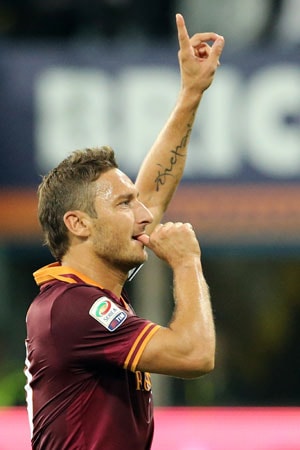 Francesco Totti struck a brace and Alessandro Florenzi added another before half-time as Roma stunned Inter Milan 3-0 at the San Siro to keep their title dream alive on Saturday.

Roma finished the match with 10 men after defender Federico Balzaretti saw red for a second rash challenge of the game in the final 10 minutes, but by then the damage had been done.

Totti struck a sweet opening goal in the 18th minute when he drove Gervinho's lay-off past a static Inter defence and beyond Samir Handanovic in the Inter net.

Roma won a controversial penalty five minutes from half-time and Totti stepped up to double the visitors' lead.

Florenzi, one of four scorers for Roma in last week's 5-0 home rout of Bologna, made it 3-0 a minute before the break to virtually wrap up the points.

Roma's seventh win in as many games means Rudi Garcia's men have stretched their lead over Napoli and Juventus to five points ahead of their respective matches against Livorno and AC Milan on Sunday.

Although Roma remain in pole position, club captain Totti was careful not to make mention of the scudetto: "It's been an amazing start to the season.

"This squad can go far and although the season is long and we will come up against teams that are stronger than us we have to fight for a Champions League place.

"That is our objective."

Inter's first defeat of the season under new coach Walter Mazzarri leaves them in fourth, now seven points off the pace.

On account of some positive displays since the start of the season, and an attack that was second only to Roma's, Inter had been expected to offer a stiffer challenge.

But by the time Mazzarri had sent on Argentinian striker Emmanuel Icardi, who scored against Juventus in a 1-1 draw two weeks ago, at the start of the second half it was already too late.

However the hosts' defensive lapses were apparent throughout and Roma were unlucky not to have added to their tally.

In the 18th minute Roma opened the scoring in style, Gervinho collecting a poor clearance and laying off for Totti to send an angled drive low through several Inter players and into the net past Handanovic.

Minutes later Inter forward Fredy Guarin rattled De Sanctis's upright with a drive that had the 'keeper well beaten, a miss that could have turned the direction of the match.

Roma rode a brief spell of Inter pressure and when Gervinho was fouled by Alvaro Pereira, as he ran in to the area from the right, the referee pointed to the spot amid protests from the hosts.

It was a close call, but Totti stepped up to smash the ball past the diving Handanovic to claim his second of the night.

Roma had the momentum and only a timely header from Andrea Ranocchia stopped the unmarked Miralem Pjanic from getting his head to Florenzi's cross from the right.

A minute before the break, Inter crumbled again when Florenzi ran on to Kevin Strootman's lay-off on the right to beat Handanovic with a powerful angled drive.

Although Roma continued to dominate, both sides created chances in a lively second half when Inter had a goal chalked off after Ranocchia was deemed to have fouled De Sanctis with a challenge which left the ball in the net.

Comments
Topics mentioned in this article
Alessandro Florenzi Francesco Totti Football Fiorentina Italy Roma
Get the latest updates on ICC T20 Worldcup 2022 and CWG 2022 check out the Schedule, Live Score and Medals Tally. Like us on Facebook or follow us on Twitter for more sports updates. You can also download the NDTV Cricket app for Android or iOS.