Juventus, with whom goalkeeper Gianluigi Buffon made his 500th Serie A appearance, now have a two-point cushion on overnight leaders Roma ahead of the capital side's home game against struggling Cagliari on Monday. 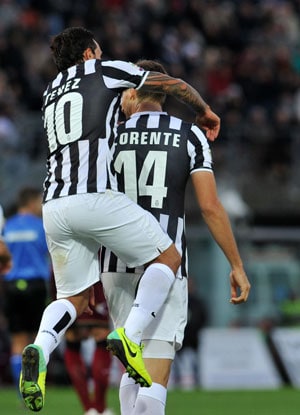 Second-half strikes from Fernando Llorente and Carlos Tevez secured a 2-0 win away to Livorno on Sunday to send champions Juventus top of Italy's Serie A for the first time this season.

Elsewhere, Lazio escaped with a 1-1 draw away to 10-man Sampdoria while Fiorentina's hopes of challenging for a place in Europe next season were dented by a 1-0 defeat away to dominant Udinese.

Juventus, with whom goalkeeper Gianluigi Buffon made his 500th Serie A appearance, now have a two-point cushion on overnight leaders Roma ahead of the capital side's home game against struggling Cagliari on Monday.

Llorente, who also set up Tevez's strike, said: "We have to take it a game at a time but, for sure, overtaking Roma can add a little pressure to them.

"But we have to keep on winning, concentrate on our own jobs and continue doing what the coach asks us to do."

Napoli, stunned 1-0 at home by Parma on Saturday, are now six points off the pace in third but stayed ahead of fourth-placed Inter after the Nerazzurri were held to a 1-1 draw away to Bologna.

Bologna took the lead in deserved fashion when Panagiotis Kone collected Jonathan Cristaldo's square ball on the counter and kept his cool to slot it past Samir Handanovic in the 12th minute.

Inter had a mediocre opening period but spirits were lifted six minutes after the break when an angled shot by Jonathan took a deflection off the boot of Frederik Sorensen to wrong-foot Gianluca Curci in the home goal.

Rolando Bianchi brought a great reflex save from Handanovic with a half-volley from outside the area, but from then on Inter had the lion's share of the chances and were unlucky not to claim a winner at the death.

Rodrigo Palacio's angled drive from the right was blocked and, after Fredy Guarin collected the rebound, Curci got down low to block his angled shot from close in.

In injury time Curci blocked at his near post when Rolando rose to send a bullet header goalwards from a corner.

Moments later the crossbar came to Bologna's rescue, stopping a sweetly-struck volley from Juan Jesus that would likely have become a contender for goal of the season.

"It was as if the game was cursed," said Inter coach Walter Mazzarri.

"We played well but we were also naive at times. I'm disappointed because we reaped a lot less than we sowed."

Stefano Pioli's side remained just above the relegation zone but the Bologna coach said: "It's a useful point for us, hopefully it will help us get out of this sticky situation."

Although Roma could regain top spot with a win on Monday, results elsewhere were welcomed by Juventus, who host FC Copenhagen on Wednesday in a Champions League clash they must at least draw if they harbour any hopes of qualifying from Group B.

Fiorentina, meanwhile, were dominated throughout a 1-0 defeat away to Udinese that left 'La Viola' with their third defeat of the campaign, but still in fifth place.

Coach Vincenzo Montella said: "We just couldn't get going in the second half. We were far too frenetic."

Struggling Sampdoria suffered a blow early in the second half when Nenad Krsticic saw red for a challenge on Cristian Ledesma.

But with new coach Sinisa Mihajlovic in charge, the hosts rallied and substitute Roberto Soriano headed Samp into a shock 67th minute lead, only for Lorik Cana to produce a fine individual effort to level at the death.

"It's never pleasing to concede a goal in the dying seconds. I'm more sorry for the lads because they showed how they can play, how they can fight," said Mihajlovic, a player with Sampdoria and Lazio who quit as Serbia coach in midweek.

"But we shouldn't let the heads go down, we've shown what we're capable of and I'm sure we will fight our way back up the table."