Sergio Aguero has been in red-hot form in the English Premier League, with most-number of goals (14) in the season so far. 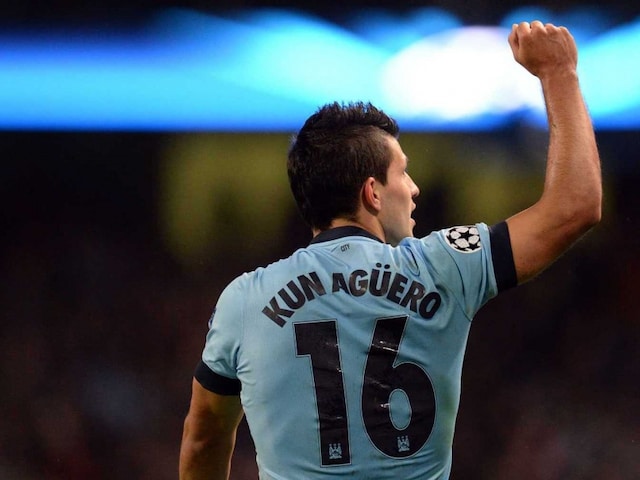 Sergio Aguero has already scored 14 goals in the season so far.© AFP

Manchester City defender Pablo Zabaleta has warned Everton they will face the best player on the planet in their Premier League clash at Eastlands on Saturday.

Zabaleta believes City forward Sergio Aguero is currently the most dynamic force in world football after the Argentine took his goal tally to 19 in 16 starts this season with a brace in a 4-1 win at Sunderland on Wednesday.

But without Aguero's impressive form, champions City would be struggling to retain the title and his compatriot Zabaleta is more than willing to declare him better than Real Madrid's Cristiano Ronaldo and Barcelona's Lionel Messi.

"I think, on current form, Sergio is the best player in the world," Zabaleta said ahead of this weekend's visit from Everton.

"I've known him a long time and at the moment he's showing the finest form of his career. Long may it continue.

"Everything he does, he makes it look so easy. He's sharp, clinical but he also works really hard for the team off the ball. That's something you have to appreciate from Sergio.

"Normally strikers want to play with the ball but he works ever so hard for the team, he's been great.

"He's the best striker in the world at the moment and we're very lucky to have him in our team."

Zabaleta also hailed Aguero's contribution in helping him score his first goal since April against Sunderland at the Stadium of Light as second placed City stayed within six points of Chelsea thanks to a fourth straight win.

"I've taken a few lessons in finishing off Sergio," he added.

"I told him not to be worried about me scoring my first of the season -- I'm only goals 18 behind him!

"We are not giving up on the title. We are six behind Chelsea and it's going to be difficult but nothing is done yet. We still have belief."

Aguero came off against Sunderland, but it is understood to only have been as a precaution, and there are no injury concerns over City's leading scorer.

City captain Vincent Kompany remains on the sidelines with a hamstring injury and will miss the visit of Roberto Martinez's side.

But the Belgium centre-back has an outside chance of being fit for City's decisive Champions League match away to Roma next week.

Everton defender Sylvain Distin believes team-mate Muhamed Besic can become a key performer for the Toffees in the remainder of the campaign.

Bosnia international Besic joined Everton from Hungarian club Ferencvaros in the close season but has had to bide his time at Goodison Park.

However, recent injuries to midfielders James McCarthy and Gareth Barry have given tough-tackling Besic his chance.

And Distin believes the 22-year-old has grabbed it with some impressive performances which should see him keep his spot for the trip to City.

"Muhamed's a really good prospect for the club," Distin said.

"He is doing great and brings a lot of energy; with the amount of games we have it's always good to have a fresh player coming in.

"He is motivated, young and he's still learning."

However, French centre-back Distin admits Everton need a positive result at City to remain in touch with the Champions League places.

"We have had a lot of games and that's going to continue for another month," Distin added.

"But we have to move on because it is a big game against City this weekend, then next week, then the following weekend.

"That is the Premier League and we want to keep fighting to make the top four."

Comments
Topics mentioned in this article
Manchester City Sergio Aguero Pablo Zabaleta Football
Get the latest Cricket news, check out the India cricket schedule, Cricket live score . Like us on Facebook or follow us on Twitter for more sports updates. You can also download the NDTV Cricket app for Android or iOS.