FC Schalke have been winless since January's 2-0 victory at home against Borussia Moenchengladbach. 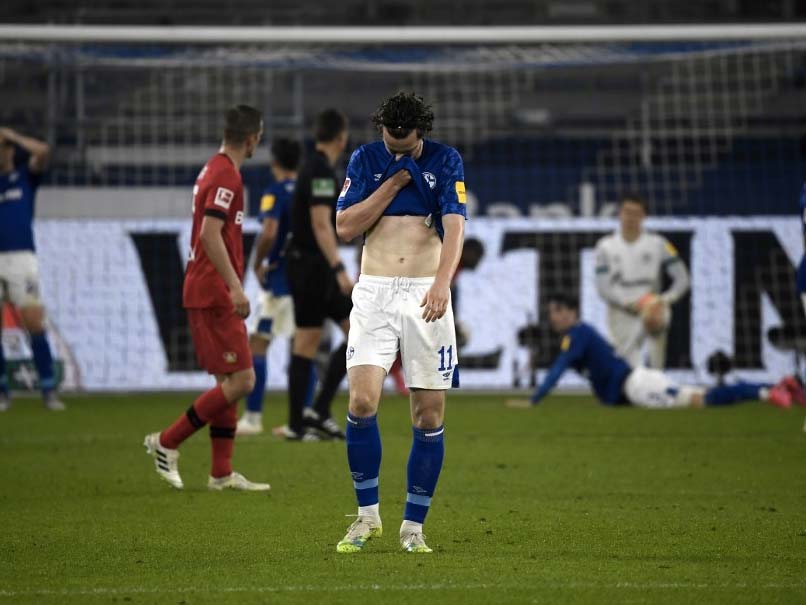 FC Schalke have 39 points from 31 matches in the Bundesliga so far.© AFP

Bayer Leverkusen moved back into the Bundesliga's Champions League places with a 1-1 draw on Sunday at injury-hit FC Schalke, who set a new club record of 13 league games without a win. The result leaves Schalke winless since January's 2-0 victory at home to Moenchengladbach, as they drop to ninth in the table having been third in December. A penalty early in the second-half was converted by Schalke's Daniel Caligiuri after a handball by Burkina Faso defender Edmond Tapsoba. However, Schalke defender Juan Miranda then turned the ball into his own net nine minutes from time to extend the winless streak.

Caligiuri was partly to blame for the late own goal as he lost the ball to Leverkusen's Brazilian defender Wendell, who crossed low into the Schalke box and into the path of Miranda.

Leverkusen, who booked their place in the German Cup final on July 4 in mid-week, is now fourth with three games left and heading for next season's Champions League group stages.

Schalke is suffering from a mounting injury list with ten players out.

"I've stopped counting," said head coach David Wagner, the former Huddersfield manager, before kick-off as he made four changes from the team which drew 1-1 at Union Berlin last weekend.

"We have to stand together as a team and fight, that was another step today after the game in Berlin," added Wagner after Sunday's result.

The Royal Blues' Under-19 captain Can Bozdogan made his debut on the right-wing while second-half replacement Jonas Hofmann, 23, also played his first Bundesliga match having been promoted from the reserves.

Nigerian forward Taiwo Awoniyi was hospitalised with a severe concussion after a nasty clash of heads during Mainz's 1-0 loss to Augsburg in Sunday's relegation battle.

Liverpool loanee Awoniyi, 22, was left motionless after landing awkwardly following an aerial collision with Augsburg defender Felix Uduokhai in the first half.

Awoniyi was stretchered off with his neck in a brace after a long delay while he received medical attention on the pitch.

Mainz said Awoniyi, a former Under-17 World Cup winner, was responsive and taken to hospital for observation.

"We have received the all-clear from the doctors," said Mainz coach Achim Beierlorzer.

"He has regained consciousness and can remember the things that happened.

"He has a severe concussion and has to stay in hospital for observation."

Awoniyi has yet to make an appearance for Liverpool since joining the club in 2015, spending numerous spells on loan in Germany, the Netherlands and Belgium.

Niederlechner was happy to atone for his penalty miss in last weekend's 1-1 draw with Cologne.

"Last week I was the idiot, this week I am the hero," he said. "That was a big step (towards safety), but we can't afford to relax."

They came closest to equalising when French striker Jean-Philippe Mateta rounded the Augsburg goalkeeper but had his shot cleared off the line by defender Philipp Max.

Mainz faces second-placed Borussia Dortmund on Wednesday before Saturday's crucial home match against Werder Bremen, who are second from bottom and three points behind them in the table.

Bayer Leverkusen Daniel Caligiuri Football
Get the latest updates on ICC Women's Cricket World Cup 2022 and IPL 2022, check out the Schedule , Live Score and IPL Points Table. Like us on Facebook or follow us on Twitter for more sports updates. You can also download the NDTV Cricket app for Android or iOS.