Schalke secured the knock-out stage of the UEFA Champions League ahead of schedule following the late winner by Christian Fuchs at the fifth match-day in Group B at Gelsenkirchen Arena. 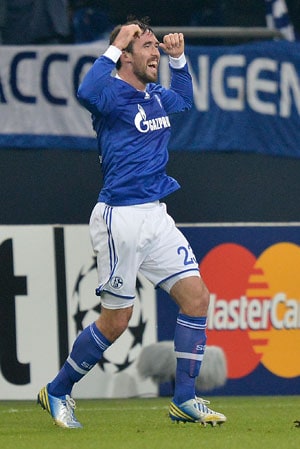 Schalke secured the knock-out stage of the UEFA Champions League ahead of schedule following the late winner by Christian Fuchs at the fifth match-day in Group B at Gelsenkirchen Arena.

From the kick-off, home side Schalke controlled the proceedings on the pitch as Olympiacos made no move to stage any offensive actions, reports Xinhua.

With ten minutes into the match Schalke's Lewis Holtby ensured the first highlight of the match when he rattled the bar with a long-range effort from 20 metres.

Nonetheless, the visitors denied playing whereas Schalke's bunch of efforts remained fruitless and short on accuracy until the break.

After the restart, Schalke started where they left off as they dictated the pace on the pitch against Olympiacos that lurked for promising counter-attacks.

The visitors nearly flabbergasted the "Knappen" as Paulo Machados long-range effort presented Schalke goalkeeper Lars Unnerstall with a problem in the 72nd minute.

Five minutes later Schalke's Christian Fuchs had cut a better figure as his long-range strike from 31 metres ensured the Germans a berth in the Round of 16. The Germans needed 27 shots on target to finally beat goalkeeper Roy Carroll.

However, Schalke sit on top of Group B followed by Arsenal, Olympiacos FC and Montpellier.

Comments
Topics mentioned in this article
Christian Fuchs Football FC Schalke 04
Get the latest updates on IPL Auction 2023 and check out  IPL 2023 and Live Cricket Score. Like us on Facebook or follow us on Twitter for more sports updates. You can also download the NDTV Cricket app for Android or iOS.