Schalke had their five-match losing streak ended in Sinsheim, but with north London giants Arsenal as their Gelsenkirchen guests, captain Benedikt Hoewedes has said his side has everything to play for at the Veltins Arena. 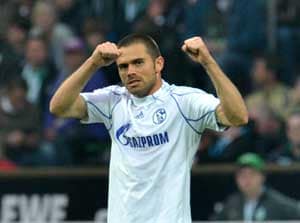 Schalke 04 are aiming to add to Arsenal's faltering recent form when they host the Gunners on Tuesday looking for a second win over the Gunners to stay top of Group B in the Champions League.

But both Schalke and Arsenal suffered away defeats on Saturday.

The Royal Blues fell to a shock upset at struggling Hoffenheim in the Bundesliga, while the Gunners were beaten 2-1 at Old Trafford by Manchester United in the Premier League.

Schalke had their five-match losing streak ended in Sinsheim, but with north London giants Arsenal as their Gelsenkirchen guests, captain Benedikt Hoewedes has said his side has everything to play for at the Veltins Arena.

"We won in London, why shouldn't we succeed in front of our own fans at the Veltins-Arena?" said the 24-year-old centre-back.

"I think we have every chance. We will not be thrown off by a defeat.

"We have to concentrate on the next task.

"The result, of course, is a step back, but overall, we put in a good performance against Hoffenheim, dominated the game and we created a number of chances, so you can't see everything as bad.

"We simply need to be more consistent in some situations, both going forwards and at the back."

While Schalke fans are already dreaming of the knock-out phase, Peru wing Jefferson Farfan said the old cliche "one game at a time" must be adhered to.

"We can't afford to look into the future and we have to take each game as it comes," he said with Olympiacos and Montpellier also in the group.

"We were fully focued in London and we must do that again."

Arsenal's faltering season took a turn for the worst with defeat at Old Trafford, their third defeat in five games.

Since losing at home to Schalke, Arsenal ground out a 1-0 win at home to Queen Park Rangers at the end of October, then produced a piece of football history by fighting back from 4-0 down to win 7-5 at Reading in the League Cup.

Wenger's team have struggled for consistency and former captain Tony Adams believes the Gunners will not find it easy to qualify for next season's Champions League and criticised them for failing to hold onto their best players.

"If Wenger gets them into the top four he's done brilliantly," said the 46-year-old Adams.

"You need to keep your best players and in recent years we've let them go a bit easy."

Theo Walcott's current Arsenal deal expires at the end of this season and the England forward has yet to sign a new deal.

Adams fears he could join the likes of Robin van Persie, Alexandre Song, Samir Nasri and Cesc Fabregas in leaving the club.

Midfielder Alex Oxlade-Chamberlain could feature in the match squad at Schalke, but he failed a fitness test on his hip injury before the United defeat.

Wenger has a host of injury worries with winger Gervinho will be out for around three weeks, while defender Kieran Gibbs, first-choice goalkeeper Wojciech Szczesny, midfielder Abou Diaby and Czech winger Tomas Rosicky all continue their rehabilitation.

Comments
Topics mentioned in this article
Football FC Schalke 04 Arsenal
Get the latest Cricket news, check out the India cricket schedule, Cricket live score . Like us on Facebook or follow us on Twitter for more sports updates. You can also download the NDTV Cricket app for Android or iOS.