Chile, Peru on brink of quarters in Copa America

While favourites Argentina and Brazil struggle for form, Chile and Peru are awakening from years of slumber at the Copa America after moving to the brink of the quarter-finals on Friday. 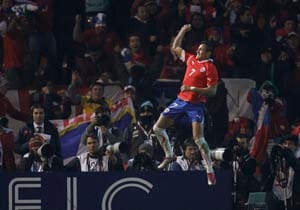 While favourites Argentina and Brazil struggle for form, Chile and Peru are awakening from years of slumber at the Copa America after moving to the brink of the quarter-finals on Friday.

Peru won the last of their two South American championships in 1975 in the halycon days of the gifted Teofilo Cubillas, who would go on to prove a star turn at the 1978 World Cup.

Chile, meanwhile, have been bridesmaids at four finals but never the continental bride.

That may change if promising starlet Alexis Sanchez has his way.

The Barcelona target scored to land a precious 1-1 draw with fancied Uruguay and leave the Chileans with four points - surely enough in practice to start looking forward to the last eight while Friday's rivals have work to do after a second straight draw.

Peru are joint top of Group C with the Chileans, having earned four points of their own after Paolo Guerrero's second goal of the tournament saw off inexperienced Mexico 1-0 in Mendoza.

With both joint leaders having held Uruguay and defeated the Mexicans, regular special guests at the South American event, Peru and Chile can look forward to a Pacific "clasico" on Tuesday with the pressure largely off.

A draw will send both sides through while Uruguay will likely have to beat Mexico to ensure their own passage.

A third straight draw would leave Diego Forlans' Charruas, like Argentina chasing a record 15th title, perched on the precipice.

Sanchez, who plays for Italy's Udinese, came to the event trying hard to put aside reports of interest in his talents from European champions Barcelona.

But his instinctive finish just after the hour mark to level Alvaro Pereira's opener eight minutes into a lively second half served to underline the talent of the 22-year-old from Tocopillo.

Chile coach Claudio Borghi is emerging as the would-be purist at the championships as his side have turned in some of the most entertaining football compared to the sterile fare of the hosts and also holders Brazil, who Saturday meet Paraguay looking to improve on a shock draw with Venezuela.

"I prefer to draw playing in this fashion than to win playing badly," insisted Borghi after seeing the Chileans end their encounter all-square.

"We knew that they can cause us problems when they attack us but this team is designed to get the ball and go forward and we are convinced this is the way to play," said Borghi, a member of Argentnia's victorious 1986 World Cup winning squad.

"Today was a good test for us, but we have achieved nothing as yet," warned Borghi.

"The goal came following a defensive mistake of ours, but Sanchez, who is a great player, took advantage," said Tabarez.

"We have won nothing yet. The tournament only really gets going in the quarters. Getting there is our primary target," said Markarian, whose side missed several good chances - Peru's Fiorentina star Juan Vargas hitting the woodwork - before Guerrero finally put the Mexicans out of their misery.

Fans have started to get on the team's back with Lionel Messi in particular failing to shine and Batista told Fox Sports he recognised that "people have the same expectations of us as we do.

"We know we have to turn things around."

Batista insisted that Messi, well below his Barcelona form, would come good.

"Messi will improve. He will be fine and be what he is - namely, the best player in the world."

Comments
Topics mentioned in this article
Football Paolo Guerrero Neymar Alexis Sanchez Villarreal Uruguay Venezuela Barcelona Peru Brazil Chile Hamburger SV
Get the latest updates on IND vs NZ 2021, check out the Schedule and Live Score . Like us on Facebook or follow us on Twitter for more sports updates. You can also download the NDTV Cricket app for Android or iOS.