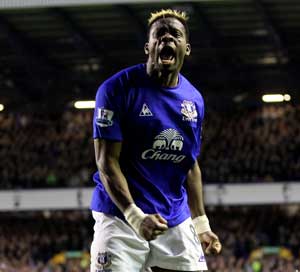 Saha's 10th goal of the season came early in the second half after Seamus Coleman had given Everton a first-half lead.

David Moyes's side had to endure a nervous finish after American midfielder Clint Dempsey reduced the deficit with 28 minutes to play, but the Toffees held on to move up to eighth place in the Premier League.

Everton had the better of the first half, with Leon Osman curling an effort over and Leighton Baines dragging a shot across goal.

Former Fulham striker Saha also threatened for the hosts with a run up the middle but Brede Hangeland denied him with a fine tackle.

Saha had another opportunity when he rose to meet a Baines corner but his header was calmly nodded off the line by Carlos Salcido.

Everton made the breakthrough 10 minutes before the break after Cahill had a shot blocked and the ball rolled out to Baines on the left.

Baines cut it back inside for Osman and the midfielder lifted a cross to the the back post for Coleman to place a firm header back across goal and beyond Mark Schwarzer.

Everton took a firm grip on the game four minutes into the second half after Jack Rodwell was brought down just outside the area by Dickson Etuhu.

Baines rolled the free-kick to Saha and the Frenchman blasted a low free-kick through the wall and past Schwarzer.

Fulham boss Mark Hughes decided to make a change and was instantly rewarded after sending on Bobby Zamora just before the hour.

Zamora, with his back to goal, laid off a cross from Damien Duff and Dempsey struck a powerful low shot into the bottom corner from the edge of the area.

Phil Jagielka almost made the game safe for Everton with a well-directed header but Salcido did brilliantly to head away from just inside the post.

Zamora failed to make the most of a headed chance at the other end after being picked out by Gael Kakuta.

Saha's afternoon ended in agony in the closing minutes, as he was stretchered off after landing awkwardly following an aerial challenge.

Comments
Topics mentioned in this article
Football Fulham Middlesbrough Wigan Athletic Chelsea Everton
Get the latest updates on ICC T20 Worldcup 2022 and CWG 2022 check out the Schedule, Live Score and Medals Tally. Like us on Facebook or follow us on Twitter for more sports updates. You can also download the NDTV Cricket app for Android or iOS.