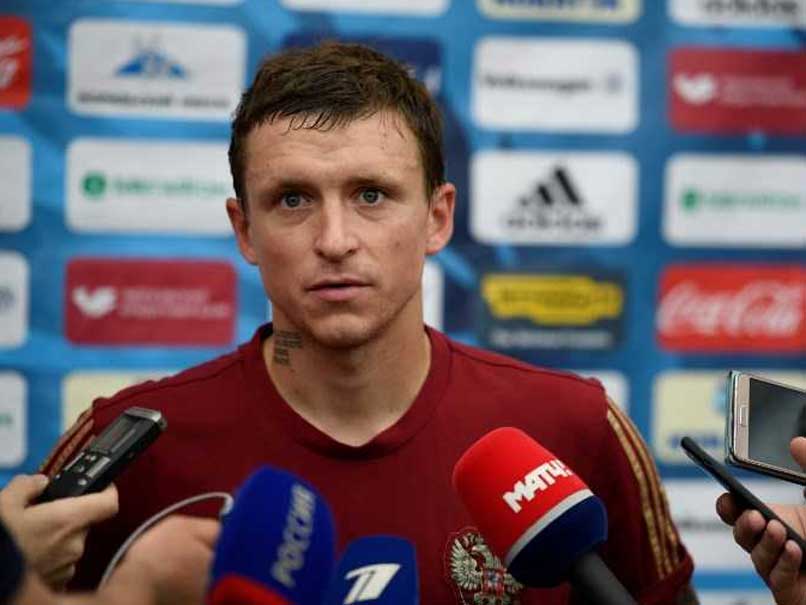 Pavel Mamaev was detained for 48 hours as a suspect in a criminal probe. (File pic)© AFP

Russian police on Wednesday evening detained disgraced footballer Pavel Mamaev for 48 hours as a suspect in a criminal probe following an unprovoked attack on two government officials, while fellow suspect Alexander Kokorin was being questioned. Premier League chiefs have requested a lifetime ban for Krasnodar midfielder Mamaev and Zenit Saint Petersburg forward Kokorin. They are also facing a possible five-year jail term after video footage caught them attacking two Russian trade ministry officials in an upscale Moscow cafe. Police said Mamaev has been detained as a suspect under criminal investigation.

"Pavel Mamaev has been detained according to the criminal code for 48 hours. He is suspected of hooliganism," police spokeswoman Irina Volk told TASS state news agency.

The footage showed one of the officials, Denis Pak, an ethnic Korean, being hit with a chair while eating a meal.

Now the former Russian international players, who have courted controversy in the past, could be banned for life from playing in Russia.

"This case is unusual in terms of our football and the league has addressed a request to the ethics committee of the Russian Football Union to impose a lifetime ban on Mamaev and Kokorin," Premier League spokesman Sergei Alekseyev said Wednesday.

Although they have not yet been formally charged, the pair have been named by police as suspects in a criminal probe over hooliganism.

Kokorin then missed a 6 pm deadline as his lawyer said he was unable to get there in time.

Police later confirmed he had arrived and was also meeting investigators. Neither was seen by waiting journalists.

Krasnodar has pledged to terminate Mamaev's contract while Zenit has condemned Kokorin's role as "disgusting". The Saint Petersburg club removed all t-shirts bearing his name following reports of the attack.

He added: "He has a concussion."

Before the cafe assault the footballers attacked the driver of a television host and damaged her Mercedes in a separate incident on Monday.

The driver was hospitalised with injuries and a criminal probe was opened.

On Tuesday, Russian President Vladimir Putin's spokesman Dmitry Peskov said the Kremlin -- "just like the whole country" -- was aware of the incident and described the video as "rather unpleasant".

Commentators, meanwhile, were keen to underline the players were not part of the Russia team that punched above its weight to reach the quarter-finals as hosts of the World Cup this summer.

"We should specify that those two...are not currently members of the national squad," Igor Rabiner, a columnist for the Russian daily newspaper Sport Express, told AFP.

Kokorin last played for the national side in late 2017, while Mamaev was last selected in 2016.

Rabiner added: "The players who represented Russia at the World Cup dramatically changed the country's attitude to the game with their successful performance and that is diametrically opposed to this pair's deeds."

For Alexei Lebedev, chief sports writer at Moskovsky Komsomolets daily, the ugly incident following the World Cup euphoria "has already transformed the image of Russian football and, unfortunately, not in the right direction."

"Fortunately, however, those responsible for Russian football and the Russian Premier League have understood this well," he said. "They reacted strongly."

It is not the first time the players' behaviour has raised eyebrows.

The RFU suspended the pair in July 2016 after a video emerged from a Monte Carlo nightclub in which Mamaev and Kokorin allegedly spent $296,000 (258,000 euros) on a champagne-fuelled party following Euro 2016, where Russia flopped.

Kokorin, who sat out this year's World Cup with a knee injury, later apologised for his behaviour and was welcomed back into the national team.

"Now they're just lowlifes who went berserk," Rabiner added. "Just ill-bred people who went crazy on the huge money that they receive from their clubs."

Comments
Topics mentioned in this article
Football Pavel Mamaev Aleksandr Kokorin
Get the latest updates on SA vs IND 2021-22, check out the Schedule and Live Score . Like us on Facebook or follow us on Twitter for more sports updates. You can also download the NDTV Cricket app for Android or iOS.