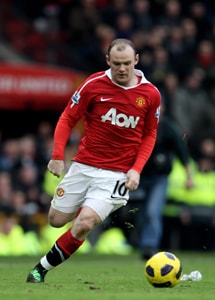 The England international appeared to elbow McCarthy in the back of the head during the first half of United's 4-0 victory at Wigan on Saturday.

Referee Mark Clattenburg awarded a free-kick at the time and subsequently told the Football Association that he felt he had made the correct decision, which left the FA unable to launch retrospective disciplinary action.

Wigan coach Roberto Martinez had criticised the failure to punish Rooney on Saturday.

"I felt Wayne Rooney was very fortunate. It was clearly a red card," Martinez said. "I saw the incident clearly and the referee did as well because he gave the free-kick.

However, United manager Sir Alex Ferguson felt Clattenburg was right not to penalise Rooney and said he feared a witch-hunt in the British media.

"I have had a chance to see it. There is nothing in it," Ferguson said. "Mark Clattenburg saw it. I think he said it was an accident.

"But, what will happen, the question has been asked and because it is Wayne Rooney, the press will raise a campaign to get him hung by Tuesday or electrocuted or something like that.

"It is unbelievable. Watch the press. It will be interesting to see it."

Had Rooney been charged with violent conduct, he would have faced a three-match ban, ruling him out of United's upcoming fixtures with Chelsea, Liverpool and either Arsenal or Leyton Orient in the FA Cup.