Riyad Mahrez, who has scored 17 goals for Leicester City in the Premier League, became the first African to win English Football's coveted player of the year award. 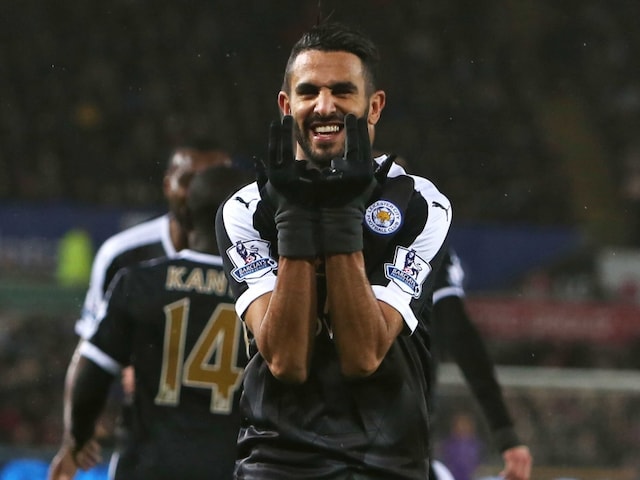 Riyad Mahrez, who moved to Leicester City, two years ago, has scored 17 goals in this season so far.© AFP

Leicester winger Riyad Mahrez became the first African to be named English football's player of the year on Sunday, straight after the Algerian helped his team close in on the Premier League title.

Mahrez was flown by helicopter to the Professional Footballers' Association ceremony in London after scoring his 17th goal of Leicester's astonishing title charge as the leaders beat Swansea 4-0 at the King Power Stadium in central England.

Mahrez was on a six-man shortlist including Leicester teammates Jamie Vardy and N'Golo Kante for the vote of their fellow professionals in English football.

"I'm very grateful to receive this award," Mahrez said. "It's extra special because if the players vote for me, it's because they've seen I've been great this year, so I'm happy. But it's more team things. Without my teammates I wouldn't get this award."

The 25-year-old Mahrez is only the second winner of the PFA award from outside England. Uruguay striker Luis Suarez won it in 2014 while playing for Liverpool.

Unlike Suarez, Mahrez was an unknown when he moved to England two years ago, joining Leicester from second tier French side Le Havre for less than 500,000 pounds.

The transfer now seems one of the best bargains ever in English football, where the record fee is the 59.7 million pounds (then $99 million) that United paid for Angel Di Maria in 2014 before selling the winger the following year.

Mahrez has provided inventiveness and flair to Leicester's attacking play, contributing not only goals but also 11 assists to help transform a team that fought for Premier League survival last season. Now a guaranteed starter, Mahrez was an unused substitute this weekend a year ago when Leicester beat Burnley to finally escape the relegation zone.

Leicester started the season as a 5,000-1 title outsider but is now set to become English football's first maiden championship winner since Nottingham Forest in 1978.

"The secret has been team spirit," Mahrez said. "We work so hard for each other. We are like brothers, it's everywhere on the pitch. That's our strength.

"If sometimes we are not good, we know we are going to run and make the effort for our teammates."

The team, which is owned by Thai duty free retail giant King Power, will be guaranteed the Premier League trophy by winning two of its remaining three games.

Only Tottenham can now deny Leicester the title. The second-place London team is eight points behind ahead of Monday's game against West Bromwich Albion after also mounting a surprise title bid.

A Tottenham player picked up the PFA ceremony's second-biggest accolade after 20-year-old midfielder Dele Alli was voted young player of the year.

Alli, who was playing in the third tier last season with MK Dons, has made an instant impact in the Premier League, scoring 10 goals and providing 12 assists. He was unable to attend the ceremony because he was preparing with his teammates to face West Brom.

The former winger, who was voted PFA player of the year in 2009, is now assistant manager to Louis van Gaal at Old Trafford.

Giggs made a club record 963 appearances for United and remains the most decorated player in the English game, having won 13 league titles, four FA Cups the Champions League twice.

Comments
Topics mentioned in this article
Leicester City Riyad Mahrez Football
Get the latest Cricket news, check out the India cricket schedule, Cricket live score . Like us on Facebook or follow us on Twitter for more sports updates. You can also download the NDTV Cricket app for Android or iOS.