No sooner has reality hit than Barcelona have to believe in miracles again as Xavi Hernandez's team seek a victory away at Bayern Munich on Wednesday to take them into the Champions League last 16. 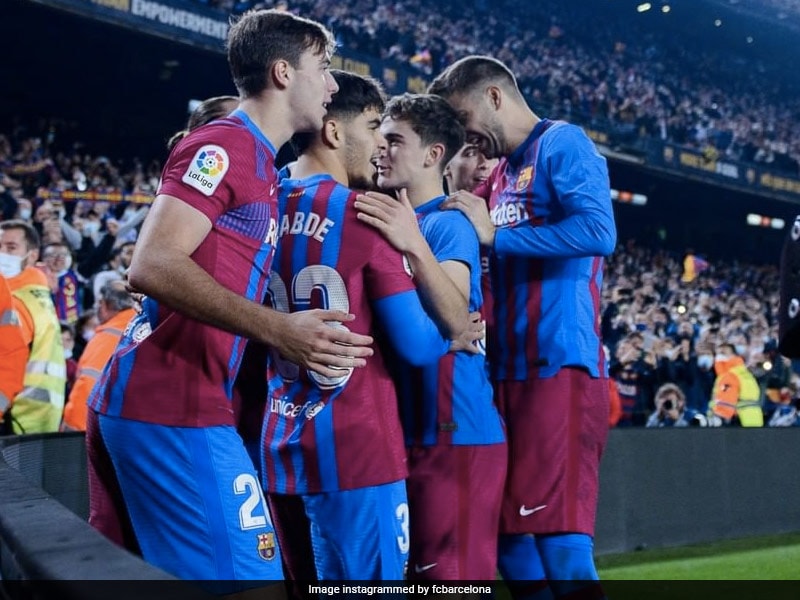 Reality bites again for Barcelona ahead of rescue mission away At Bayern.© AFP

No sooner has reality hit than Barcelona have to believe in miracles again as Xavi Hernandez's team seek a victory away at Bayern Munich on Wednesday to take them into the Champions League last 16. Four weeks after Xavi was appointed, Barca suffered their first defeat under their new coach on Saturday and as Real Betis' Juanmi celebrated in the corner at Camp Nou, it felt like a bit of hope began to fizzle. Xavi arrived as the club's iconic former midfielder and devoted student of Pep Guardiola, a symbol of a return to the values and principles that Barcelona hold dear and were seen to have lost.

Nobody expected a transformation, that 'tiki-taka' would be rekindled overnight or that Memphis Depay would morph into Lionel Messi or that a porous defence would suddenly tighten up.

Few disagreed that Xavi would need time, and most probably a lot of it, to turn Barcelona even into a contender again, let alone a winner of the game's biggest prizes.

But they might have hoped to steer clear of losing at home to Real Betis, an upwardly mobile team under Manuel Pellegrini with talented players but one that is more likely to finish in La Liga's top eight than its top four.

Just as they might have thought it possible Barcelona would win at home to Benfica last month, a result that would have rendered Wednesday's game against Bayern meaningless, with progress to the last 16 safely secured.

Instead, the first 30 days of Xavi's tenure have been yet another exercise in hammering home reality and perspective.

There have been glimpses of innovation and change but the overriding sense is of familiar flaws being underlined and expectations being further downgraded.

"In the dressing room I have told them that I am proud, that this is football," said Xavi. "It is a shame and I hope it doesn't affect us because on Wednesday we have to compete like animals to try to get through."

Barcelona are now 16 points behind La Liga's leaders Real Madrid, and while they can make that 13 by winning a game in hand, it feels almost pointless now to compare.

If re-joining the title race recently appeared a possible, albeit lofty, target to achieve, it has quickly become almost completely out of reach.

Catching the top four, meanwhile, seemed doable not long ago even with just a minor upturn in results, but instead that now looks increasingly likely to be a close and difficult fight.

In the Champions League, consecutive wins over Dynamo Kiev under Ronald Koeman meant there was room for optimism that Barcelona could complete the comeback by beating Benfica at home.

Yet the most likely scenario now is that they finish third and drop into the Europa League, a competition they could win if they took it seriously and one that would also offer them an alternative route back into the Champions League next year.

Psychologically, though, it would be hard to stomach and financially, there are fewer guarantees. Only the Europa League winners tend to earn the same amounts as those clubs that go out in the Champions League last 16.

Bayern might yet aid Barcelona's cause by fielding a weakened team, with their place at the top of the group already secured and a game against seventh-placed Mainz to come in the Bundesliga on Saturday.

There is also still the possibility of Benfica slipping up against Dynamo Kiev, whose only point in the group came in a goalless draw at home to Benfica back in September.

What is certain is that little of the blame can be placed at the feet of Xavi, who inherited a team that has not even begun to replace Messi, with the Argentinian's goals, creativity and aura all still sorely missed.

Barcelona rely too heavily both on veterans, like Gerard Pique and Sergio Busquets, and youngsters, like Gavi, Nico Gonzalez and Ansu Fati.

The defence is vulnerable and the attack is blunt. They could do with Ousmane Dembele, who could be fit enough to start against Bayern, and Fati, who is unlikely to be ready.

Xavi needs them both back as soon as possible to reignite the spark and to bring back the hope that has already begun to fade.

"The objective is to go and win. We have no choice," said Xavi on Saturday. "If we get the three points, we will be in the last 16. If not, we will be at the mercy of the other game, but the good thing is that it's in our hands."