A source in the investigation said Benzema had admitted approaching Valbuena about the sex tape "on behalf of a childhood friend" who himself had been contacted by blackmailers in possession of the sex tape. (Karim Benzema Left Out of France Squad After Sex tape Scandal Emerges)

But Benzema's lawyer said the player was innocent and "has admitted nothing at all".

Benzema, 27, was charged with complicity to blackmail and conspiring to commit a criminal act, the prosecutor's office in Versailles, outside Paris, said.

The charges carry a prison sentence of at least five years.

He was also banned from meeting 31-year-old Valbuena, a midfielder for French club Lyon where Benzema began his career.

An hour after Benzema was charged, France coach Didier Deschamps said he was leaving both players out of his squad for friendly internationals against Germany and England on November 13 and 17 respectively.

Deschamps said Benzema was injured anyway and he was omitting Valbuena because he was not in the right "psychological" state.

The coach refused to answer other questions on the case.

"The best is to let justice do its work and take the decisions it has to," Deschamps said.

Benzema has scored 27 goals in 81 appearances for France and has already notched six league goals this season for Real in his seventh campaign with the Spanish giants.

He did not play in Real's 1-0 Champions League victory over Paris Saint-Germain on Tuesday.

The Spanish club's president Florentino Perez voiced his "full support" for Benzema, who on Thursday trained alone, according to a Real statement.

The player has told investigators he talked to Valbuena about the sex tape when the French squad met for training on October 5 ahead of friendly internationals against Armenia and Denmark.

It is not clear what was said between the two players, who are thought to be friends.

A source close to the investigation said: "Karim Benzema has admitted speaking to Valbuena at the request of a childhood friend, who was approached by three blackmailers who were in possession of the sex tape.

"Benzema said he had agreed with his childhood friend on what he should say so that his teammate (Valbuena) would negotiate exclusively with him."

Benzema was arrested on Wednesday and spent the night in custody in Versailles before being taken to the court in a police car with tinted windows.

He was released on Thursday after being charged.

His lawyer Sylvain Cormier said he "has played no part in blackmail".

"Karim Benzema will show he is of good faith," he said, adding that "his friend Mathieu Valbuena is in his prayers". 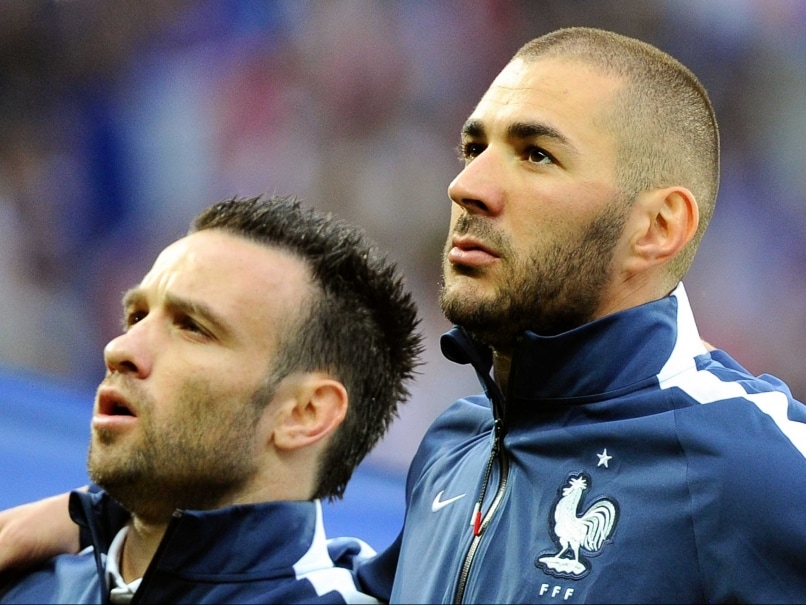 His Facebook page carried a photograph of Benzema putting his arm around him during an international match.

The blackmail case began in June, when Valbuena lodged a complaint with police after being telephoned by an unknown person who said he had the sex tape.

The caller did not specify a sum of money but said they should come to an arrangement.

Police then took over, posing as Valbuena's business associate in later calls with the blackmailers, who threatened to release the video ahead of the Euro 2016 championships, which France is hosting.

The investigation led them to three men, including one who was a member of Valbuena's entourage and who had direct access to the footballer's phone containing the sex recording.

Two of the group are also said to have ties to Djibril Cisse, a former French international and a teammate of Valbuena's when both played at Marseille.

Cisse was detained for questioning last month but quickly released without charge.

Benzema comes from a family of Algerian origin in Lyon and developed into a powerful striker with his home town club before joining Real Madrid in 2009.

It is not the first time Benzema has been embroiled in a criminal inquiry.

Last year he and fellow France international Franck Ribery were cleared of accusations that they slept with an underage prostitute.

Comments
Topics mentioned in this article Karim Benzema Mathieu Valbuena Real Madrid Football
Get the latest Indian Premier League 2020 news, check out the IPL 2020 schedule, Cricket live score . Like us on Facebook or follow us on Twitter for more IPL 2020 updates. You can also download the NDTV Cricket app for Android or iOS.
Related Articles