Real Madrid Hang On For Win After Karim Benzema Brilliance 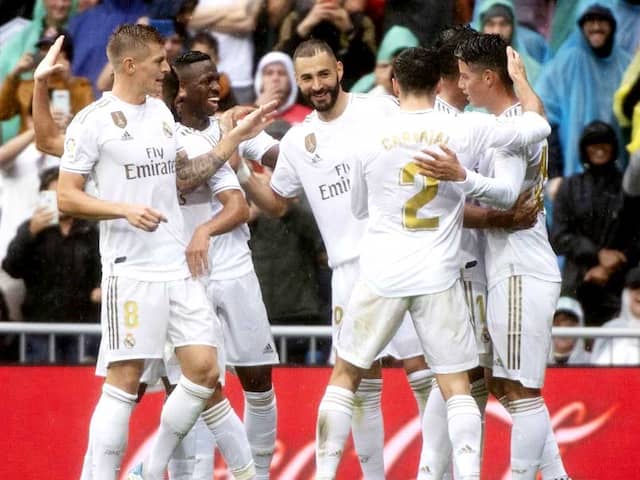 Karim Benzema and Casemiro led Real Madrid to a 3-2 win over Levante.© AFP

Karim Benzema scored twice on Saturday in an outstanding performance for Real Madrid against Levante, although his side were left hanging on for a 3-2 win on the day Eden Hazard made his La Liga debut. Benzema's goals came just six minutes apart in the first half at a wet Santiago Bernabeu, before Casemiro put Real 3-0 up. However Levante, who had won their previous two outings, made a fight of it in the second half as they pulled goals back through Borja Mayoral and Gonzalo Melero.

"The second half was more difficult for us, but the overall feeling was positive," said coach Zinedine Zidane, whose team had drawn their previous two games.

"We have got the three points and we were incredible in the first half, the way we played, the goals, the commitment. We just need to stay focused for the full 90 minutes."

Hazard also came off the bench for the final half-hour to make his first La Liga appearance after a thigh injury had interrupted the start of his Real career following his 100 million-euro ($110 million) move from Chelsea.

The Belgian could now start when Real go to Paris Saint-Germain for their opening Champions League game on Wednesday.

"I am happy for him," said Zidane. "He will do us good. He is not ready yet though -- he has only trained four times with the team. But when everyone is fit, when we have our rhythm, we will hurt teams."

Gareth Bale will also be available to face PSG after suspension kept him out here, but Sergio Ramos will be unable to play because of a European ban.

Zidane was also without the injured Luka Modric here. However, as well as Hazard, fellow summer signing Eder Militao came off the bench in the second half and the former Porto defender could start in Paris.

Real would have won by a greater margin here had it not been for some inspired goalkeeping from Aitor Fernandez, who produced a stunning one-handed stop to keep out a Benzema shot midway through the first half.

However, the hosts went ahead shortly after that when Dani Carvajal crossed from the right for Benzema to bullet home a header.

The Frenchman struck again in the 31st minute, with James Rodriguez pouncing when Sergio Postigo headed the ball down into his path, and teeing up Benzema to score his fourth of the campaign.

"I have been hearing for ages after matches that Karim put in his best performance," said Zidane.

"That's enough of that! It means that he has been playing well for a while."

Benzema was also involved in the build-up to the third goal five minutes before the interval, which concluded with Vinicius Junior squaring for Casemiro to finish.

Levante pulled one back in the 49th minute as Carlos Clerc crossed from the left to the near post where Mayoral -- on loan from Real -- converted.

Benzema then curled a shot against the post, while Vinicius had a goal disallowed and Hazard tested Fernandez, but it was Levante who scored again.

Substitute Melero proved too strong for Carvajal at the far post as he headed in a marvellous cross by Jose Campana, yet Madrid held out.

Leaders Atletico Madrid will seek their fourth win in as many La Liga games when they play later at Real Sociedad in the first game at the Basque club's newly refurbished stadium.

Barcelona are also in action at home to Valencia, who this week sacked coach Marcelino Garcia Toral, replacing him with the former Real Madrid assistant coach Albert Celades.

Karim Benzema Eden Hazard Football
Get the latest Cricket news, check out the India cricket schedule, Cricket live score . Like us on Facebook or follow us on Twitter for more sports updates. You can also download the NDTV Cricket app for Android or iOS.