Reading FC to give scholarship to two youths from Arunachal Pradesh

Reading and Arunachal Pradesh Football Association have planned to train youths with the help of top notch coaches from the English club. 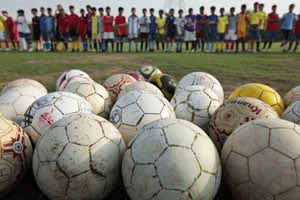 Prior to the announcement, Nomuk said, he held a discussion with Arunachal Pradesh Chief Minister Nabam Tuki and Lok Sabha member Takam Sanjoy on promotion of soccer in the state.

After a threadbare discussion with Sanjoy, who is also the president of Arunachal Pradesh Football Association (APFA), Reading decided to go for a talent hunt and train youths.

Top notch coaches from the English club will tour different parts of the state in connection with the training programme, possibly from October next year, he said.

"Under the six-month RFC-APFA MoU, the coaches from the internationally famed club with our support would tour all over the state to identify footballers with potential to become world class players," the MP added.

Comments
Topics mentioned in this article
Football Everton Bayern Munchen Michael Barry Owens
Get the latest updates on India vs Australia and check out  Schedule, Results and Live Score. Like us on Facebook or follow us on Twitter for more sports updates. You can also download the NDTV Cricket app for Android or iOS.