Star Spanish striker Raul said on Monday that he wanted to stay with Bundesliga side Schalke until his contract ends in June 2012, despite a less-than-stellar performance from the team this season. 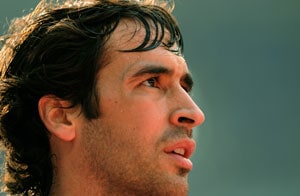 Star Spanish striker Raul said on Monday that he wanted to stay with Bundesliga side Schalke until his contract ends in June 2012, despite a less-than-stellar performance from the team this season.

"My contract runs until 2012. I want to fulfil this and continue to have fun," the 33-year-old former Real Madrid legend told Kicker magazine.

After finishing narrowly second to champions Bayern Munich last season, Schalke have enjoyed less success this time around, despite the recruitment of Raul, who has scored 11 goals in 25 games.

They are 10th in the league and will likely have to rely on the German cup for the chance of European football next season. They play second division side Duisburg in the cup final in Berlin on May 21.

Raul said Schalke were rebuilding this season for a major attack on the Bundesliga crown in the 2011/2012 term.

"We are a team that is currently in the process of being built, with quite a few players who have just arrived and a lot of young players," he told Kicker.

And he stressed his desire to lift the German cup.

"I lost in two finals with Real Madrid. That wasn't supposed to happen. So I know what I'm talking about when I say: 'Finals have to be won'."

"To win a trophy in my first season. It's a wonderful idea," he added.

Schalke are also still in this year's Champions League and take on Valencia in the round of 16 second leg on Wednesday at home after securing a vital away goal in a 1-1 draw in Spain.

Raul is certainly a handy weapon in the competition. Not only has he scored the most goals in Champions League history, with 69, he has also played the most games with 139.

Comments
Topics mentioned in this article
Football FC Schalke 04 Shinji Okazaki Borussia Dortmund Bayern Munchen Valencia Real Madrid
Get the latest updates on ICC T20 Worldcup 2022 and CWG 2022 check out the Schedule, Live Score and Medals Tally. Like us on Facebook or follow us on Twitter for more sports updates. You can also download the NDTV Cricket app for Android or iOS.